50 crashes a day in Chicago due to speeding drivers

The ordinance allowing speed cameras to be placed near schools and parks to improve safety passed last week, and we're thankful that Alderman Michele Smith voted in favor of it. In her newsletter explaining the basis for her decision, she includes a link to a report with data on traffic crashes provided by CDOT (link directly to PDF download is here) to help the city council members make their decision. 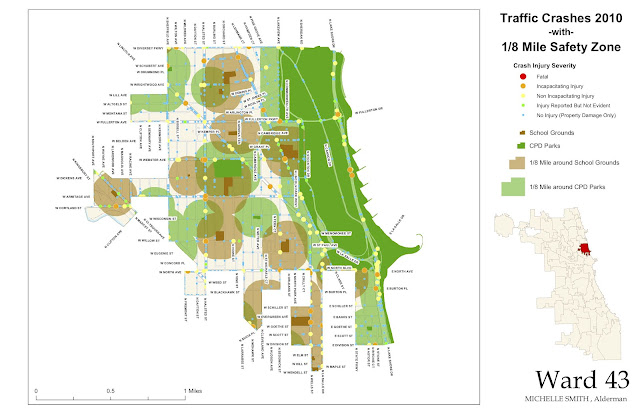 The report makes for some shocking reading, and provides strong support for why the city needs to take more steps to make our streets safer.

It’s been Illinois law now for nearly two years that drivers of motorized vehicles must stop for pedestrians crossing the street in a marked crosswalk, even on crosswalks where there is no stop sign or stop light. That type of crosswalk is called an “uncontrolled crosswalk”, an apt name that reflects the often-chaotic feel fro the perspective of a person on foot trying to cross it! So under the law, when a person is on a crosswalk trying to cross the street, a driver must stop completely to allow them to cross, as if there were a red stoplight signal that had suddenly appeared.

Of course, we know this rarely happens.

There’s now a tool available that covers all three of those factors: The in-street stop for pedestrian signs. These are three-feet-high signs that are permanently mounted in the middle of the street at a crosswalk and that clearly proclaim “State law/Stop for (pedestrian symbol) within crosswalk”.

You may have seen the non-permanent version on Wells Street south of Division, which we featured in this prior post. We have learned in an interview with a staff member of the community center nearby that they purchased the signs after a woman picking up her grandchild from their daycare was hit and injured by a car driver. The staff rolls the signs out each morning and takes them in at night.

The permanent in-street pedestrian signs are one of the items available to aldermen citywide to be purchased using their annual menu funds. We have requested Alderman Michele Smith use a portion of her menu funds to install them in our ward, and she has expressed support for the initiative. Her staff is currently working to analyze the best spots to place these new pedestrian safety tools.

Email ThisBlogThis!Share to TwitterShare to FacebookShare to Pinterest
Labels: Stop for Pedestrians

I saw a question on Twitter posed recently by @stevevance, one of the co-authors of the Chicago sustainable transportation website Grid Chicago. He asked: “Americans always call for safer streets AFTER people get hit. Why don’t we demand safer streets before people are hit?”

My non-Twitter-length reply: Because we’re focused on making decisions based solely on data, and it seems that according to the general zeitgeist, there “must” be data proving that a person has been injured or killed before a street is considered worthy of upgrades. In my opinion, that’s often a flawed belief. Looking at data to make decisions is often rational, but when we’re evaluating our streets, data doesn’t capture all factors that should be considered.
Injury and fatality data doesn’t reflect factors like: Is crossing this street as a pedestrian a relatively safe and stress-free experience? Does automotive traffic regularly exceed the posted speed limit? How does the speed of the auto traffic affect people walking along or crossing the street? Do drivers follow the law and stop for people in the crosswalks? Does this street have accommodation for a person riding a bicycle? Is riding a bicycle on this street a relatively safe and stress-free experience? Do drivers follow our state’s three-feet passing law when overtaking a person riding a bicycle? How does the speed of auto traffic affect people riding bikes on this street?

The city council will be voting next week on the speed enforcement camera ordinance. In support of the measure, my husband and I submitted to Alderman Michele Smith the statement below.

Grid Chicago has provided detailed coverage of this week's committee-level hearing with lots of information about the proposed measure, which you can read in three parts starting with this one. 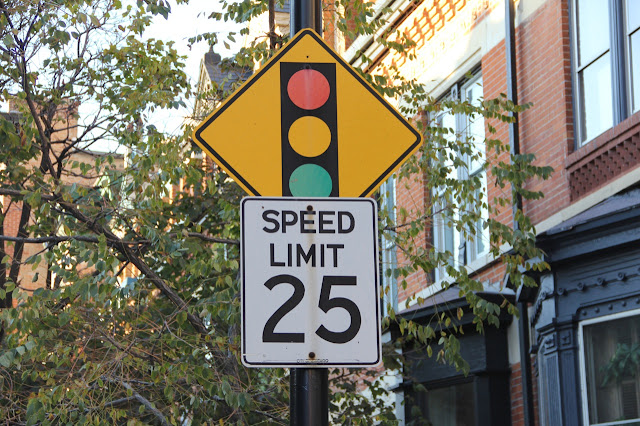 We’re writing today to express strong support for the speed camera initiative. This is on behalf of ourselves only, but our opinions and thoughts are summarized in three posts I wrote for Bike Walk Lincoln Park on the subject, which are linked below, and I invite you to read those if you haven’t already.

You've heard our thoughts on the Fullerton Parkway bridge project on this prior post. We have had many conversations with people on- and off-line on the topic, and in the end, we're not fully convinced that the final result will be a net gain for people walking and riding bicycles to the Lake Front Trail; however, we're going to take the positive steps of working within the confines of the project to try to make the design as pleasant as possible for users who are choosing active transportation to traverse the area. (Join us at our next Bike Walk Lincoln Park meeting on 4/16 to contribute ideas, details below.)
But today's post is to point out why this little segment of Fullerton is so important. You already know from our prior post on the subject that there is NO public transportation service on Fullerton within a mile of the Lake Front Trail, because that ends at Halsted. So, to access the trail, many people walk or ride bicycles across the bridge to the LFT. It always feels crowded, but we never knew there were statistics on the usage rates. Until now.