The scoop from Streets for Cycling 2020 Plan guru Mike Amsden

If you’ve been to any of the citywide Streets for Cycling 2020 Plan meetings, you’ll probably recognize Mike Amsden, who is a Bike Program Project Manager at CDOT. He and others are working hard to create the final eight-year S4C2020 plan, and also concurrently drawing up new and upgraded Chicago bikeways to be installed this season.

For bicyclists who are dying to know what’s next on the horizon for Chicago’s bike network, he’s THE man to talk to.
He also happens to be a resident of Lincoln Park! I worked with Mike in my role as a volunteer community advisory group leader for the S4C2020 public input gathering, and he graciously agreed to answer questions recently about the ongoing bikeways being installed right now and in the coming year.
_____________________

Bike Walk Lincoln Park: There are seven miles of protected bike lanes installed in Chicago so far, almost all on the west and south sides. It seems like to date, they’re being put in where it’s easy to put them in, meaning extremely wide street width and no parking meter issues. Would you say that’s true?

Mike Amsden: Well, we began with areas in which aldermen actively expressed an interest in having them, and in which there were fewer design problems to overcome. It also gave us a chance to get experience designing them, and they give us examples within the city to show that they can be implemented successfully.

BWLP: Will the north side ever get protected bike lanes?
Read more »
Posted by Bike Walk Lincoln Park at 9:49 PM 2 comments:

It's summer in Chicago, and that means peak season for traffic on the Lakefront Trail. The Lincoln Park neighborhood's section of the LFT from North Avenue to Diversey is among the heaviest used portions, usually filled with beachgoers, runners, bicyclists, and strollers.
Lots more after the jump!
Read more »
Posted by Bike Walk Lincoln Park at 8:17 PM No comments:

(Much more after the jump!)
Read more »
Posted by Bike Walk Lincoln Park at 6:01 PM 4 comments:

Now that Bike Walk Lincoln Park is one year old, we decided it's time to formulate a mission statement.

During our recent BWLP meeting (minutes coming soon!), we reviewed and adopted these principles, to help guide us as we go forward.
MISSION STATEMENT:

Bike Walk Lincoln Park’s mission is to work to ensure that riding a bicycle and walking for transportation and recreation in the 43rd ward is pleasant and safe.


Why yes, we are excited about these signs. This month marks the two-year anniversary that it's been state law that drivers must STOP for pedestrians in crosswalks, not just swerve around them. These signs are helping to finally educate drivers, and make life easier for people walking!
In addition to the first in-street stop for pedestrian sign that we reported about in this post, we've now spotted five more locations.


On the last Saturday in June, on the final day of the 43rd Ward Green Week, Alderman Michele Smith and her staff led an inaugural 43rd ward bike ride! It was a beautiful warm, sunny morning.

The route was easy and chosen to showcase how many streets we have that are safe and beautiful for riding bikes. 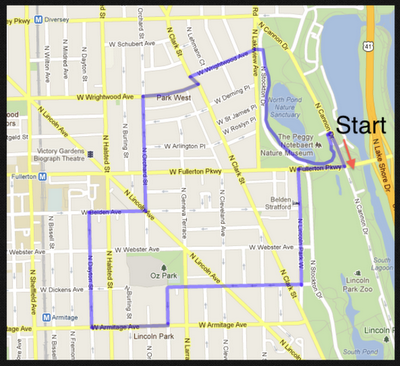