A few weeks ago, after our Bike Walk  Lincoln Park bike share meeting,  a young journalist posed a very reasonable question to me that nevertheless took me completely off guard: So, what has your group accomplished? As I struggled to formulate a semi-coherent response, I made a mental note to work up some talking points on that subject, so I would be better prepared next time someone asked. This column will serve as my crib sheet.
Michael Reynolds and I co-formed Bike Walk Lincoln Park in June 2011 as a way of providing a forum for people who were interested in making our neighborhood even better for walking and bicycling. It was that simple. We spent much of 2011 just trying to get the word out about our group, establishing a web presence with the blog, and getting to know Alderman Michele Smith and her staff.

What's in store for Lincoln Park under the Streets for Cycling 2020 Plan?

The visually exciting news of last week was the opening of the Loop's first two-way protected bike lane on Dearborn Street, of course. Who can resist the sight of our mayor high-fiving smiling bicyclists? Well not me, that's for sure.

Somewhat overshadowed was the release on the same day of the Streets for Cycling 2020 Plan, which lays out the upgraded infrastructure that we hope to see installed citywide over the next eight years. You may remember that I was a volunteer leader of the north side Community Advisory Group, and Bike Walk Lincoln Park co-chair Michael Reynolds attended all the meetings faithfully, as did many other BWLP supporters. (You might spot yourself in a picture or two in the plan.) 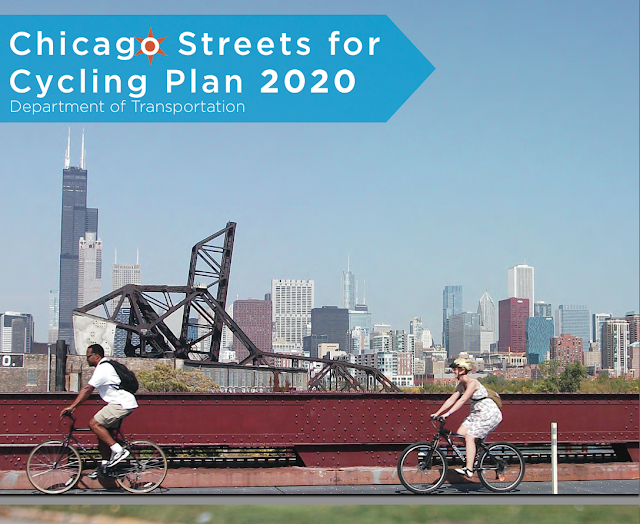 Please download the plan and read it (link directly to PDF here)! Don't rely on this flimsy blog entry to summarize for you; there's just too much there. It's a beautifully done 57-page document that takes you through the process of putting together the plan, and then describes the recommendations for each area of the city.
(More after the jump)
Read more »
Posted by Bike Walk Lincoln Park at 9:03 PM 2 comments:

The Loop's first protected bike lane is open for business!


You'll remember that in August, Mayor Emanuel announced publicly that Chicago would be getting its first two-way protected bike lane in the Loop on Dearborn, by the end of 2012. As the weeks and then months went by and there was no sign of it materializing, I began to lose hope, but suddenly, construction began. I've been stalking the new lane every opportunity I had while it was being installed, and I still can't believe it's done, but it is!

It opened on Friday, December 14th, at a press conference hosted by Chicago Department of Transportation Commissioner Gabe Klein, and attended by Mayor Emanuel. I rode on the lane for the very first time on the way to the event, and was pleased to immediately be in the midst of five or six other riders heading the same way. It was like a little slice of Europe, right here in Chi-town: 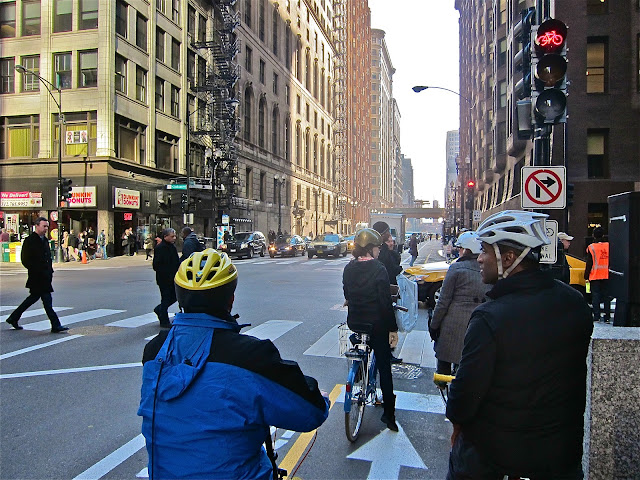 We used a map taken from the current suggested locations on the Chicago Bike Program's website seeking community input, and worked through each area of the ward, discussing reasons why a specific place would justify a station location. Chicago Department of Transportation staff have said they would like to have the stations every half mile quarter mile apart at the most, so we made sure there were no gaps in our suggested network.

We produced a map (link to view the PDF map is here), a list and a letter. The map is below, and you can see the letter we sent to Alderman Michele Smith and CDOT Commissioner Gabe Klein here.