What cyclists on sidewalks are telling us

We see people riding bicycles on the sidewalks in Chicago a lot. For anyone age 12 years or older, this is illegal activity. No matter how slowly they're riding, their combined weight and velocity can cause serious injury to pedestrians. Signs on Sheridan Road warn that violators are subject to a $250 fine, "temporary disabling of bicycle" and arrest. (Disabling their bikes and arrest? Yet a taxi driver who runs into an elderly woman in a crosswalk and causes her death on this same street simply receives two tickets, see our prior post on this.) 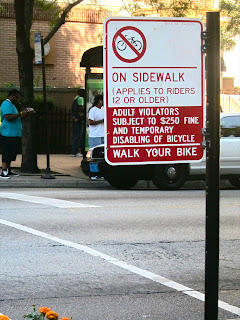 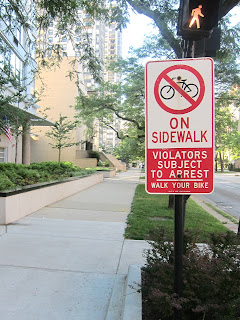 In any case, with the exception of shared-use paths like the Lakefront Trail, bicyclists are supposed to ride on the street. They certainly have the right to be there, but they're not often welcomed. Chicago has about 5,000 miles of roads but only 125 miles with markedbike lanes. Some motor vehicle drivers seem surprised, if not outright hostile, when they see bike riders on the asphalt next to them.

What are the law-breaker cyclists telling us when spurn the road? They're telling us they've done a mental calculation involving the speed of the motor vehicles, the lack of space for bikes, and the risk of getting doored, and said, no thanks: I'll take the sidewalk, and stay alive.

They're telling us we need more safe bike lanes.

Families who want to ride their bikes face a dilemma. When a child under 12 years old rides on the sidewalk, is the accompanying adult really expected to ride on the street, on the other side of trees, planter boxes and a solid wall of parked SUVs? According to our ordinances, the answer is yes.

Increasingly, the lack of infrastructure is becoming a problem for a growing number of tourists, who rent bikes and have a reasonable expectation that there are safe routes to take to the popular destinations. Unfortunately, their assumption is often wrong. We've seen out-of-towners choosing the sidewalk in the Loop and throughout the popular lakefront neighborhoods.

We're advocates of following the law. Endangering pedestrians is not acceptable. And yet, when we see cyclists on the sidewalk, we can't get angry. We hear the message they're sending.

Fortunately, Mayor Emanuel has promised to install 100 miles of protected bike lanes in Chicago in his first term of office. These lanes will be a way for me, you, and your Aunt Jean to ride bikes, and keep everyone safe. We can't wait.
Posted by Bike Walk Lincoln Park at 8:20 PM