We're going to be discussing potential locations of bike lanes in the next few weeks to help gather community opinions about where people would like to see major bike lane improvements on Chicago's north side. The CDOT Streets for Cycling 2020 project team is asking each Community Advisory Group (open to all, e-mail me at Michelle at KairiesStenzel dot com to join the North Side Community Advisory Group) to identify which streets we would like them to consider for upgrades in bicycling infrastructure.

The types of lanes that are considered "upgrades" are nicely laid out in the NACTO Urban Bikeway Design Guide, but since viewing that involves paging through lots of data, I'm making it easy for you by highlighting some basics. All images below are taken from the NACTO guide.

So first, what do we have currently in Chicago? Some streets have "marked shared lanes", which are a bicycle symbol and chevron-shaped shared lane arrow ("sharrow") stencilled onto the street, next to the parked cars. They aren't really lanes, simply visual reminders to motorists that they should expect to see bicyclists there. These marked shared lanes are not even mentioned in the NACTO guide, so I assume they're not considered optimal. They fall into the "better than nothing" category, but we're aspiring to higher standards than that. So we move on to...

These are the lanes we're used to seeing currently in Chicago. The bike lane is in between the row of parked cars and the moving lane for motorized vehicle traffic. 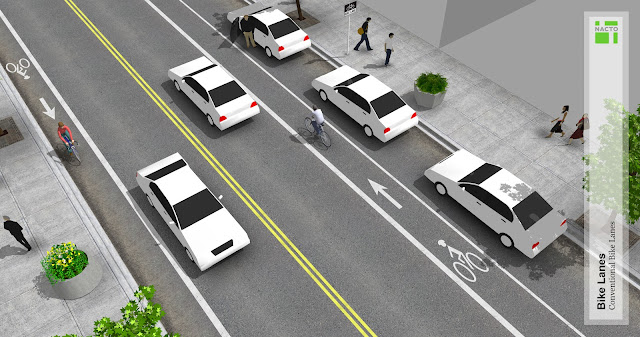 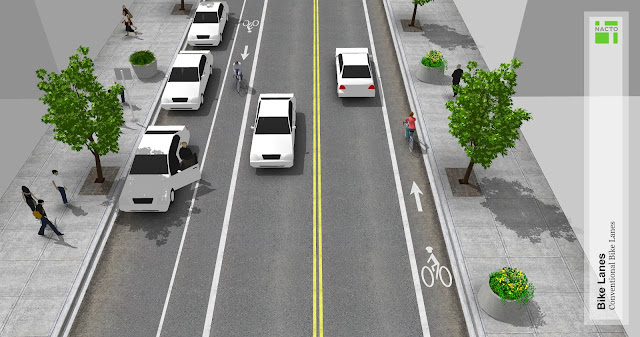 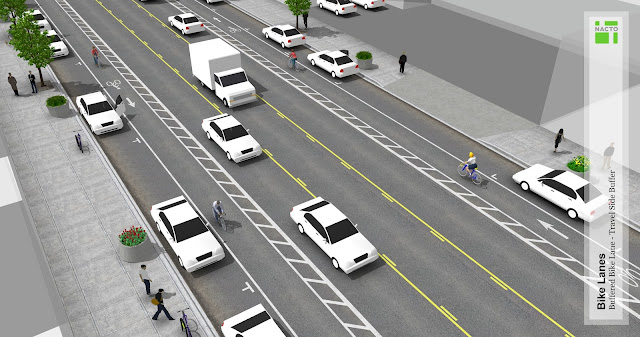 The next step up in the hierarchy are buffered bike lanes, where a buffer of space (using the diagonal pattern shown above) is added between the bike lane and the moving vehicles. The advantages are that the buffer creates separation between the moving traffic and the bicyclist, increasing the feeling of safety. It also gives a little more room for a bicyclist to pass another bicyclist without moving into car traffic.

The down side is that the dooring risk remains, although the bicyclist now has a little more room to ride farther from the parked cars, increasing time and space to react to a door being opened. Buffered bike lanes also do nothing to prevent double parking, and may in fact encourage it because "Hey, there's even more room for my motorized vehicle now!"


Which is why we really need...


These are the Cadillacs of on-street bike lanes. As we discussed in this previous post, with protected bike lanes, the bicycle lane is moved against the curb, and there is physical protection between the bike lane and the moving vehicles.


On Chicago's north side, given the density of population, high rate of car ownership and widespread expectation of street parking, the protection will often consist of a row of parked cars. If we're going to have parked cars all over our streets, let's at least make them serve the purpose of protecting bicyclists from moving traffic.


Note about the risk of dooring being reduced: I would say it greatly reduces or nearly eliminates the risk of dooring, given the buffer zone, the fact that most bicyclists will ride in the middle of the protected lane, and the statistical variation between the average number of left-door openings in every vehicle v. the average number of right-door openings.

And the down sides? No real down sides, in my opinion. From a design standpoint, there are space requirements and parking issues that we'll let the engineers work through.

From a user's standpoint, there will be people crossing the protected bike lanes multiple times on foot to pay the parking meter, put the receipt on their windshield and cross over to the sidewalk again. Some people will walk or jog on the protected bike lane, even with a perfectly useable sidewalk inches away. Intersections involving turning cars will be tricky and need getting used to by all street users. This is a brand new street configuration that we don't yet have on the north side, and there will be a learning curve.  But the increased feeling of safety from bicycling in this type of lane will be an enormous upgrade from what we have now.

The nice thing is that protected bike lanes that are first created relatively quickly and inexpensively using just thermoplastic paint and flexible bollards can be upgraded over time, to add more permanent features like the decorative planters seen in this image... 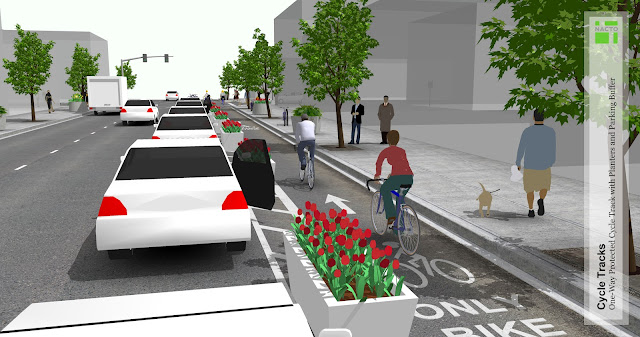 ... or an actual hunk of concrete with curbs, like the one below. 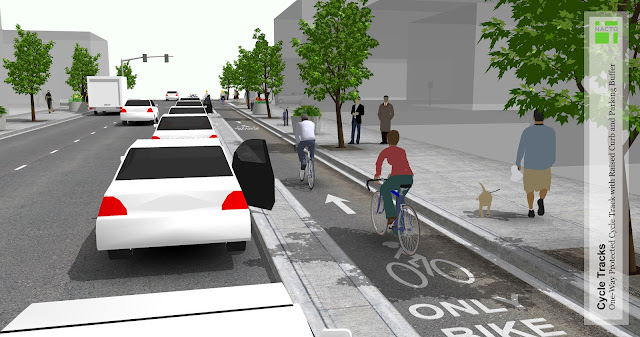 Where's the rendering of a concrete curb with decorative planters on top of it, NACTO? That's what we should all aspire to: Safe and beautiful. But in the mean time, thank you for the visuals.

Remember that this is a Cliff Notes version of bike lanes. For much more information and other variations on these bikeway types, I encourage you to look at the full NACTO guide online.

We'll be meeting to discuss recommendations for improved bikeways next Monday. Please join us!

Email ThisBlogThis!Share to TwitterShare to FacebookShare to Pinterest
Labels: Meetings, Streets for Cycling 2020