The construction on the Fullerton Parkway bridge began in March and is scheduled for completion in December. I had written previously about how the project will be detrimental to people who are walking or riding a bike to the Lake Front Trail in this prior post. The information I had then was from a written description of the project provided to the public, and notes taken at a presentation I attended.

I’ve since obtained the drawings of the planned finished product so you can clearly see how this will be a step in the wrong direction for our city’s walkability and bikeability.

This shows the scope of the project: 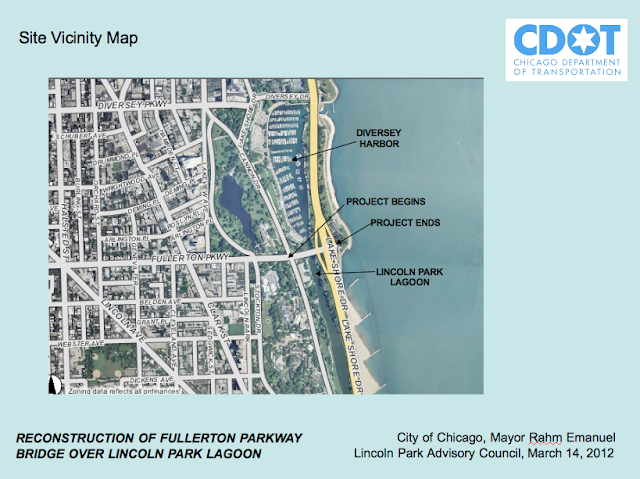 This shows the existing conditions from an aerial view: 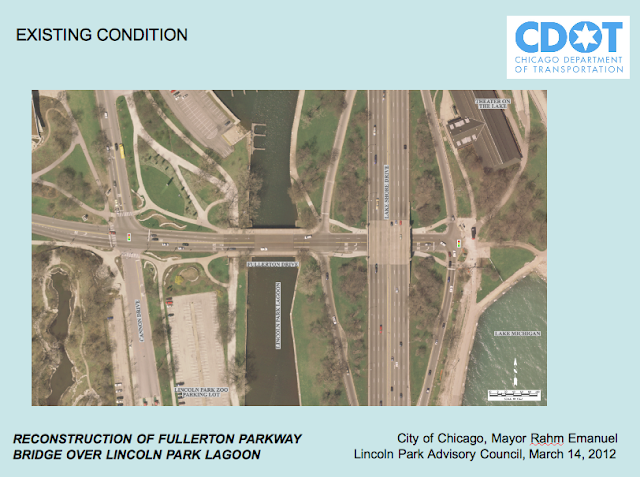 Here is the illustration of the final planned design: 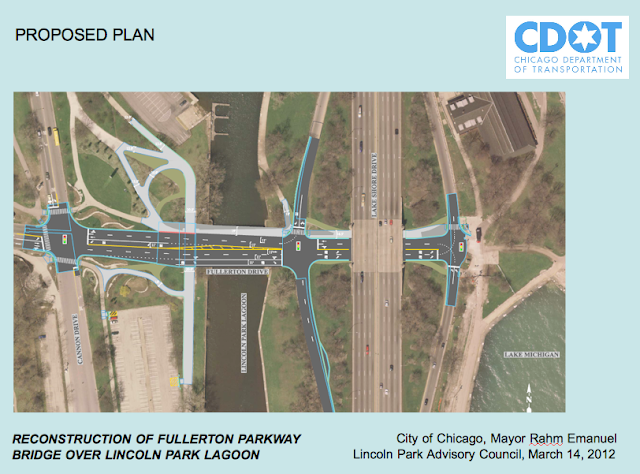 The redesign took space that was previously very much used by people on foot and on bikes, and gave it to motor vehicle drivers instead. All pedestrians and bicyclists will now be crowded onto one narrow, shared space, which serves as the third-busiest access point for the Lakefront Trail on the entire 17-mile long stretch of the trail (see prior post for more on this).  At a time when we’re talking about increasing access to the Lakefront Trail and about making Chicago the most walk- and bike-friendly city in the nation, we're handing over precious space to motor vehicle traffic, at a highly visible place.

Besides simple net loss of width, the demolition of the south sidewalk removes a natural and direct path for people on bikes and on foot, and permanently forces them to go out of their way. All pedestrians who arrive at the intersection of Cannon and Fullerton from the south will have to cross Fullerton to get to the north side of the street and to the only sidewalk available, even if their intended direction is south on the Lakefront Trail (which is the more popular way to go, toward North Avenue Beach and the Loop).

People arriving from the south will have a second option to reach the sole remaining north sidewalk, and that is to take a meandering path on the south side of the street that slopes downward toward the lagoon, crosses under Fullerton, and then makes a long loop back upward toward the remaining sidewalk (or they can climb the stairs back up, unless they’re on a bike, in a wheelchair, use a walker, or have children in strollers). 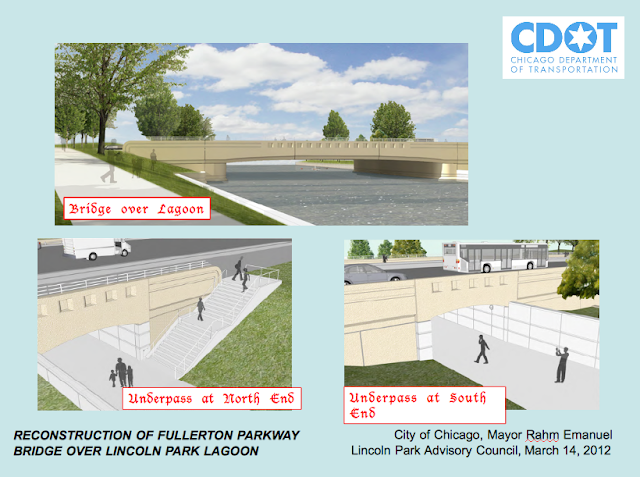 Either way, though, we’re forcing people on foot and on bikes to go an extra distance, to take extra time, to go out of their way, and to take a non-direct path involving changes of elevation, just to get to the Lakefront Trail. We’re making it harder for them and we’re discouraging their choices of transportation, in order to make the intersection more convenient for people who choose to drive and thereby rewarding their choice.

As a community advocate for better biking and walking, I thoroughly enjoyed reading Chicago’s newly released Pedestrian Plan (you can download it from the Pedestrian Plan website here). However, I found it highly ironic that when completed, the Fullerton Parkway bridge will immediately be in flagrant violation of one of the goals of the plan, and we will have missed the opportunity to correct other problems detailed in the plan.

Flagrant violation: Missing Sidewalk. On page 82, the plan says that missing sidewalks create a gap in the pedestrian network, and the first step to solving the problem is to identify those gaps. Well, I’ve found one gap! The south sidewalk of the Fullerton Parkway bridge, very well loved and very well used for decades by residents and visitors to Lincoln Park, missing since March 2012.
Next: Missing crosswalks. On Page 18 of the plan, Tool #1 says, “Marked crosswalks should be installed at all legs of signalized and stop-controlled intersections. … This is a low cost pedestrian safety tool.”

Under the new design, there will be three pedestrian crosswalks at the intersection of Cannon and Fullerton, but there won’t be one on the east leg of the intersection. That one will remain a missing crosswalk, presumably to avoid inconveniencing motorists turning onto Fullerton by making them wait for pedestrians to cross. You can be sure that many lake-bound people on foot and on bike at the southeast corner will cross there anyway even without painted lines and a signal, because the alternative requires them to go in the opposite direction of their destination, and wait for three signal changes while they’re at it.

Finally: Wide turn radius. For those of you not as geeky about street design issues as I am: A wide turn radius is when the “corner” of the curb of an intersection is greatly rounded so that there’s really no corner at all. This lack of a sharp corner has a double whammy effect. First, it encourages car drivers to make the turn at high speeds, since they can swoop around it with little chance of hitting the curb with their back wheels. Also, it creates a wider street distance that pedestrians have to traverse to cross the street, which leaves them vulnerable on the roadway for a longer period of time. So the new standard in forward-thinking city design is to reduce the turning radius to "sharpen" the corners, so that drivers slow down and turn carefully, and so that pedestrians are in the “danger zone” for less time.

The turn radii at Fullerton and Cannon are currently enormous, and there’s no plan to reduce them under the new design, as far as I can tell, which is an unfortunate lost opportunity. Between the number of lanes, the width of the lanes and the wide turning radii, the entire intersection is more like something you’d see in a  far-flung car-centered suburb than within the bounds of vibrant Lincoln Park, at a pedestrian-filled corner right by the Peggy Notebaert Nature Museum, the Alfred Caldwell Lily Pool, and the Lincoln Park Zoo.

I don’t expect to receive an invitation to the ribbon cutting ceremony in December.