Found: Scores of potholes in the bike lanes


We held our first annual Bike Lane Potholepalooza yesterday! It took a little over two hours for Michael Reynolds, Andrew Herman and I to ride up and down Wells, Lincoln, Armitage, Halsted and Clark spotting the craters that pose a danger to bicyclists. 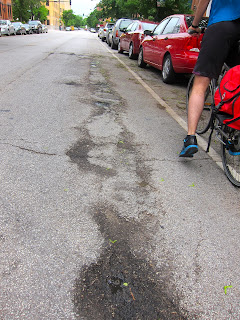 We stopped at each one, noted the address and snapped pics of a few of them. Then we compiled the data into a table to submit to Alderman Michele Smith, along with this cover letter to her.

And what did we find? 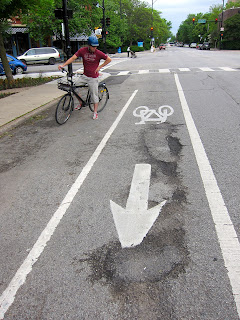 Well, it's no surprise to anyone that Lincoln "won" the dubious honor of most potholes. Some of the Lincoln Avenue potholes that are counted as one pothole report are actually clusters that have merged together into one long, multi-headed, cancer-like growth. And that was only on six blocks of Lincoln! We weren't able to ride on the two blocks from Webster to Fullerton due to the Lincoln Park Live street festival.

We also didn't ride on Wells south of North Avenue even though it has been in terrible condition for about eight months, since the water line (or maybe sewer line?) work was done last fall, because we're aware that Wells is scheduled to be resurfaced. We asked Alderman Smith in our letter to expedite the resurfacing to make this important bicycling street safer as soon as possible.

When you see a pothole in the bike lane, you don't have to wait for the next Bike Lane Potholepalooza to do something about it!

You can report the pothole pretty easily to the city via any of these methods:


I've used the 311 website method and can report that it works. I always doubted that anything would come of a report, but was surprised that the potholes I reported recently via the 311 website were addressed within about 48 hours. I was easily able to attach a picture and make the report from my iPhone, and believe me, if I'm able to do that, they're making it super easy for anyone, so don't hesitate to try. If everyone reported more, there would be fewer of them on the streets.
It would be great if the city would send crews on regular maintenance runs, where they repaired every pothole that they saw on a given street, but apparently that's not how it works; they respond to individual requests. So we hope the city crews get started on the 53 requests we've submitted, and we're looking forward to posting the "After" pictures.

Follow us at @BikeWalkLP
Posted by Bike Walk Lincoln Park at 2:26 PM