Chicago now has 300 Divvy bike share stations up and running, with 3,000 Divvy bikes available for use. Lincoln Park has been part of the system since its roll out at the end of June 2013. It took a little while to install the first 300 stations, but they were in by end of October.

Here's what the map of Lincoln Park Divvy stations looks like currently:
We're pretty well covered! Depending on how you define Lincoln Park, there are about 38 stations in this neighborhood. I took pictures over the last few weeks of some of the newest stations for today's post.

This station on Lake Shore Drive at Diversey, in the furthest northeast corner of the Lincoln Park neighborhood. It's a little out of the way from the commercial destinations to the west, but it's likely a convenient station for people who live in the high-rise condo buildings along Diversey.

There was a station placed in front of the Walgreen's at Clark and Diversey, but unfortunately it was apparently blocking access to some pipes, so the station was moved to Hampden Court, just south of Diversey, alongside Market Place grocery. It's a large station, with 19 docks.
After being strangely devoid of Divvy stations for many months, the Wrightwood corridor suddenly got four stations in Lincoln Park, so it's now well-served.
Fullerton Avenue also received a few new stations. The one installed along Fullerton at the Lakefront Trail will likely see a lot of use by tourists who stick to the lake for sightseeing, but also by residents seeking access to the beaches and Theater on the Lake.
The station that was installed at Julia Porter Park on Lincoln Avenue just north of Fullerton has the honor of being the 300th and final Divvy station installed for the season. This location will undoubtedly be very well used, with all the bars, restaurants and arts venues along Lincoln to the north, and DePaul University to the south. 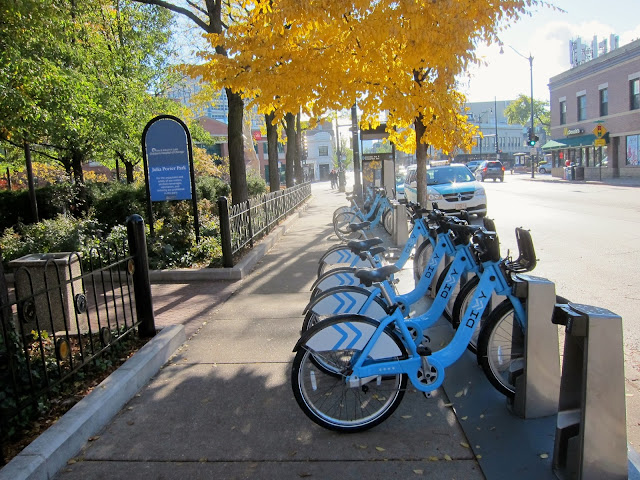 It's so wonderful to see so many people using the Divvy system in Lincoln Park, even on the cold and overcast days we've had lately. Divvy will be up and running all year round, and as long as you dress appropriately for riding a bike, you can continue even as the weather gets chillier. This coming winter will be my third year of riding my bike year round, and I can attest that it's nowhere near as challenging as you might think it is, but shhhh! Don't tell anyone, or they might stop telling me how "tough" I am. Soon those piles of leaves may be piles of snow, so get out there and Divvy on!