The final plans for the Children's Memorial site have been released and approved by the city's Chicago Plan Commission. All documents are available for viewing via links provided on Alderman Michele Smith's website. I've reviewed them and will highlight some of the positive changes that are planned for biking and walking.

The documents include plans for continuous bike lanes on Halsted and Lincoln along the project site. Below is a document included in the plans, over which I've added green highlighting to make the lanes more visible.
A few things to note:

We can't tell if these will be buffered lanes, but we expect they will be.

There are four bike boxes included in the plans! Bike boxes are waiting areas in front of a lane, on which bicyclists stay during a red light.
Bike boxes are created by pulling the stop bar back for motor vehicles in their right turn lane. Bicyclists can wait there, and on the green light, can turn right (soft or hard turn) or continue straight. It may take some time for drivers to understand that they are to stop behind the white stop bar, and not on top of the bike box.

The bike boxes almost certainly will be green in color, per NACTO design standards. We hope that additional green thermoplastic paint will be used copiously, if not all along the length of the lane, at least for a portion of them leading up to the enormous six-way intersection, similar to what is shown in the photo on Kinzie.

In addition, the plans reflect that there will be intermittent striping through the intersection on Lincoln and Halsted to continue the presence of the bike lane.

Here's the current view on Halsted, looking south into the six-way intersection: 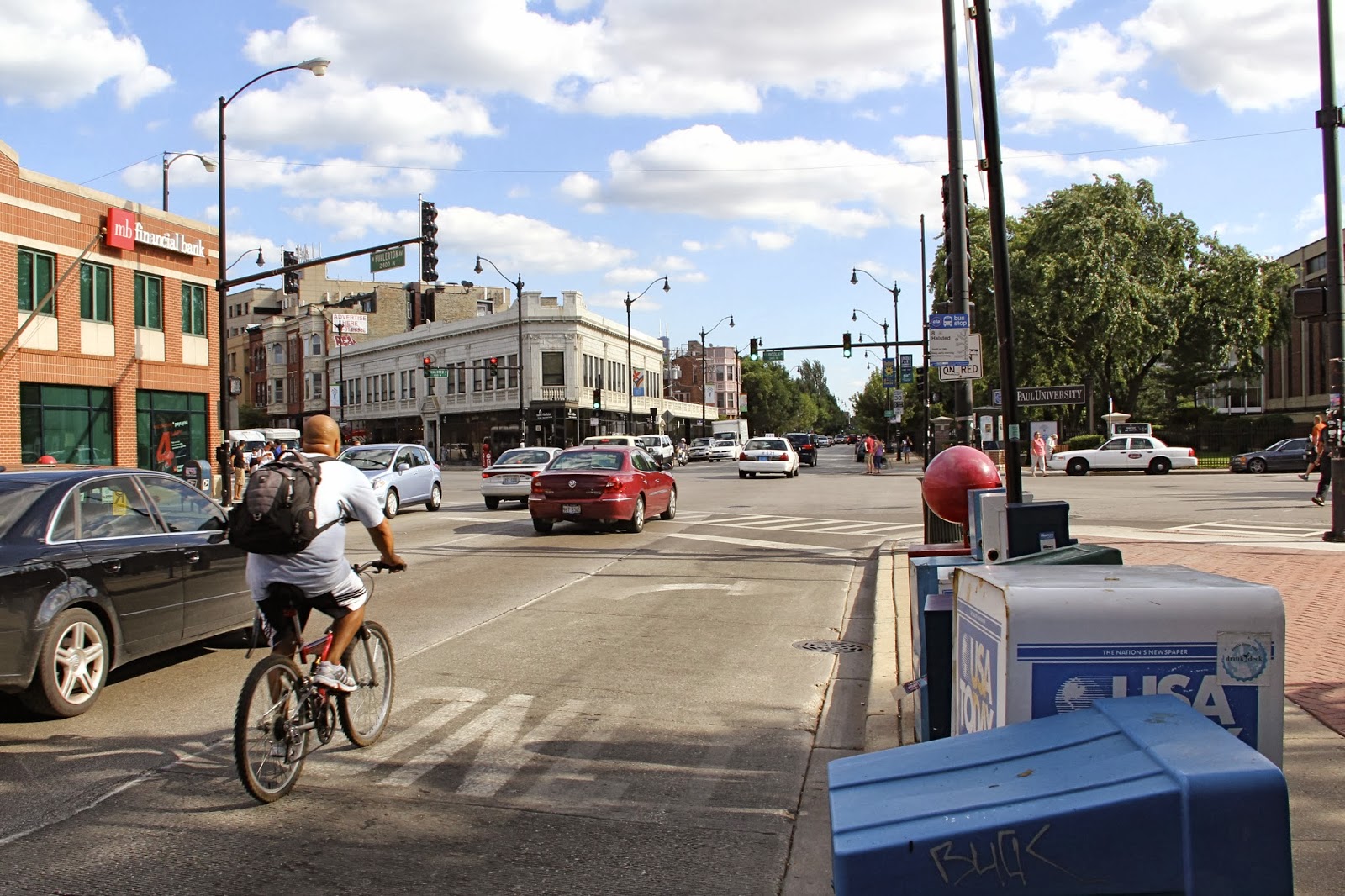 And here's my rough "after" view: 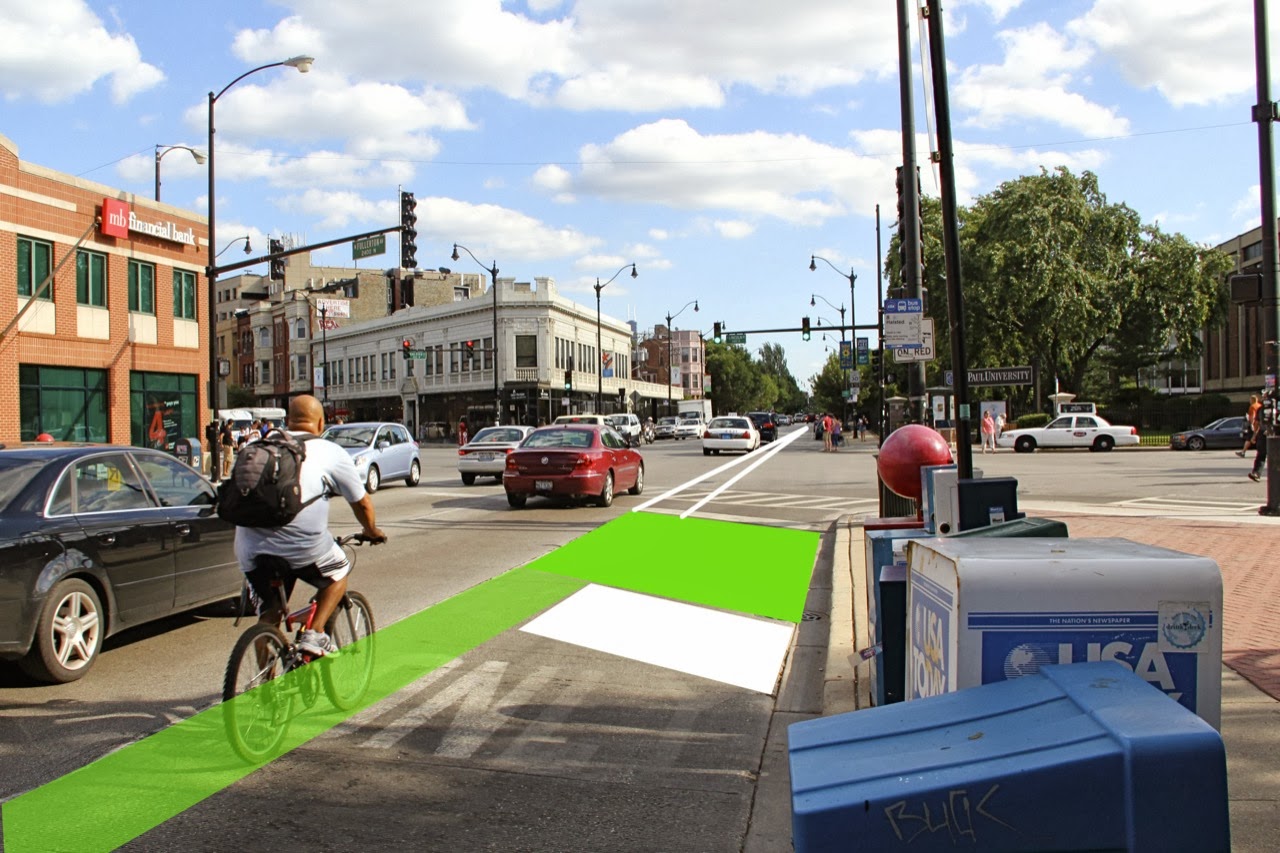 I also note that the final plan documents say that the continuous bike lanes on Lincoln north of Fullerton are contingent on the acquisition of right-of-way or land north of Fullerton, and doing that is not an obligation of McCaffrey Interests, so that portion is "subject to re-design". So, nothing's guaranteed there.

Unfortunately, there are no plans to help people who want to ride on Fullerton, east of Halsted, where there are no bikeways of any type all the way to the lake.

Also, what about left turns? Personally, I avoid making left turns on my bike at this intersection by turning instead at other streets before or after, like Wrightwood or Belden. This new design doesn't assist cautious bicyclists like me who don't like acting like drivers and turning left with the car traffic.

Nevertheless, we look forward to seeing these plans implemented, as they will bring a number of real improvements for bicycling in the area.

Steve Vance of Streetsblog Chicago did a nice overview of all the other improvements for biking and walking in this post, so I won't repeat them all here, but just highlight some others that I noticed:

The cars turning left off of Halsted will get their green arrow at the end of the green light phase, instead of the beginning. This is favorable for people walking because it reduces their wait time.

There are a number of curb bumpouts included in the plan, and these are very helpful in 1/ reducing the time and distance that pedestrians are sharing space with motor vehicles and 2/ slowing down drivers when making turns.

The fact that trucks will no longer be loading at street level on Lincoln Avenue, but instead be entirely underground is really great. In case anyone has forgotten what it used to be like, behold:

You may now remember that the former design of the truck unloading area forced people on the sidewalk to walk in the street whenever a long truck was parked in the bay. The nearly non-existent bike lane on Lincoln was blocked as well, of course. The elimination of this curb cut and numerous others along Lincoln under the new plan will make bicycling and walking much more pleasant.

Finally, the plan says that the developer (or purchaser of the final property) must promote the use of public transit to all residents and businesses, including giving information about locations and schedules. Alderman Smith reported in her newsletter that "For two years, the developer will give Ventra cards to new residents." If that just means handing over a new $5 plastic card, then meh. But if it's at least pre-loaded with $50 value or something, then that's a nice way to encourage active transportation.

Finally, we expressed previously that the central plaza would be much better as a car-free space, and the CEO of the Chicago Park District voiced the same opinion during the Chicago Plan Commission hearing (as reported in Streetsblog Chicago); but alas, the final plans still have the big circular driveway taking up much of the space.

Here's the architect Antunovich and Associates' rendering of what they believe the plaza might look like in winter:
What do you think about the final plans?