Walking and biking to work is increasing in Chicago


The U.S. Census Bureau released a report this week on how many Americans bike or walk to work. The strongest "take away" of their news release was that bike commuting is up 60% nationwide in 2012 compared to 2000, and that is the largest increase in commuting mode (including public transit, walking, driving alone, carpooling, and more).

You can read the full report but here's one chunk of the table I find to be most interesting and important: 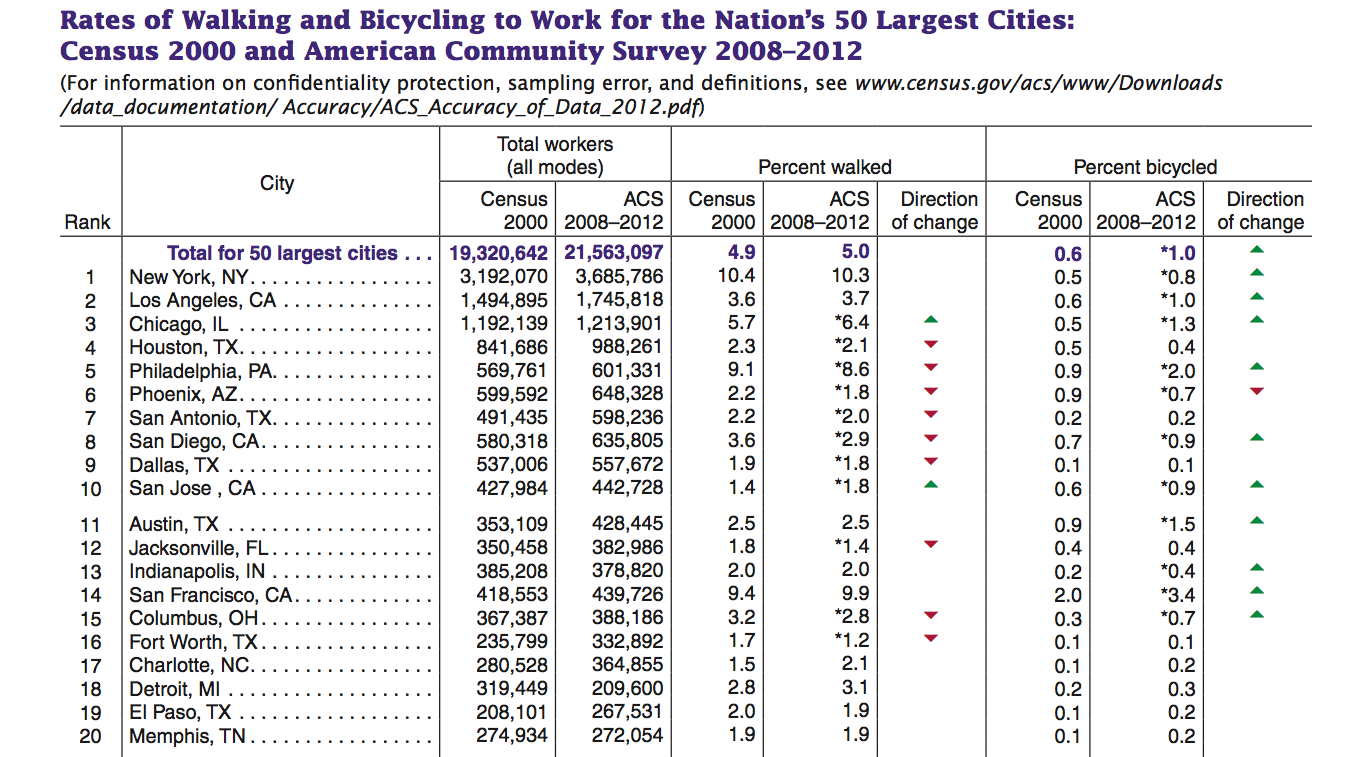 In Chicago in 2000, 5.7% of workers walked to work, but by 2012, the percent had increased to 6.4%. (I would guess that's a function of the greater number of people living in Streeterville, River North, West Loop, and South Loop who can walk to their central business district jobs.) That may seem like a modest increase, but it's actually bucking the nationwide trend of fewer people walking to work during that time period. Even on the table of the biggest 20 cities above, you can see that only Chicago and San Jose, CA showed increased rates of walk commuting.


As for bike commuting, in 2000, only half a percent of Chicagoans rode their bikes to work, but by 2012, it was 1.3%. Since there are about 1.21 million workers in Chicago in 2012, that's nearly 16,000 people getting on the saddle to head to work. No wonder the city's bike lanes seem to be getting more crowded lately!

Chicago's jump from .5% to 1.3% is an increase of 160% over 12 years. That's great news, and it  reflects an 8% increase year over year [Note: a prior version of this post incorrectly said it was 4% year over year]. I think we can do better that that, and I think we will, thanks partly to the availability of Divvy bike share since July 2013. The installation of a greater number of  protected bike lanes in more areas of the city will help encourage more people to try biking to work as well.
The census data ranked "Larger Cities" (population 200,000 or higher) according to their rates of walk and bike commuting. For highest percent of people who walk to work in Larger Cities, Boston was once again on top with 15.1%. Chicago's 6.4% comes in at #14. That's not a bad showing.

For bike commuting, Portland was once again crowned the Larger City "winner" with an impressive 6.1% mode share. Our neighbors to the north, Madison and Minneapolis, came in second and third with 5.1 and 4.1 percentages, respectively.  Chicago didn't make it into the top 15 Larger Cities bike commuting table, which is dominated by cities with populations between 200,000 and 800,000. Philadelphia is the only city with a general population of more than 1.5 million people to post a mode share of 2% or higher.

The 4- 5- and 6% bike commuter numbers of Portland, Madison and Minneapolis are indeed impressive, and kudos to those cities for reaching that point already, in spite of climate challenges including rain and winters even harsher than Chicago's.

However, when we're talking about sheer numbers of bicyclists, Chicago is still posting among the highest numbers. When you multiply the percentage bike commuting share with the number of workers, here's what you get:
So when you look at raw numbers of people getting their butts on their bikes and riding to work, New York City has us all beat by a large margin, with more than 29,000. Portland's 18,000 is very impressive for a smaller city, but LA, Chicago and San Francisco are only a few thousand behind and catching up fast. If I were marketing bikes or bike locks, I'd be targeting the cities with the highest numbers of current bike commuters, combined with the strongest upward trend.

What do you see when you look at the graphs?

Follow us at @BikeWalkLP
Posted by Bike Walk Lincoln Park at 4:37 PM