Our narrow, beloved Lakefront Trail takes a beating and gets TLC

I've taken a lot of pictures of the Lakefront Trail in the last few weeks. It started one day in October, when I found myself on the 70th floor of Lake Point Tower for the first time, and I looked down and saw that famous landmark, beloved recreational and commuting route, and enormous point of pride for all of Chicago, the mighty Lakefront Trail: 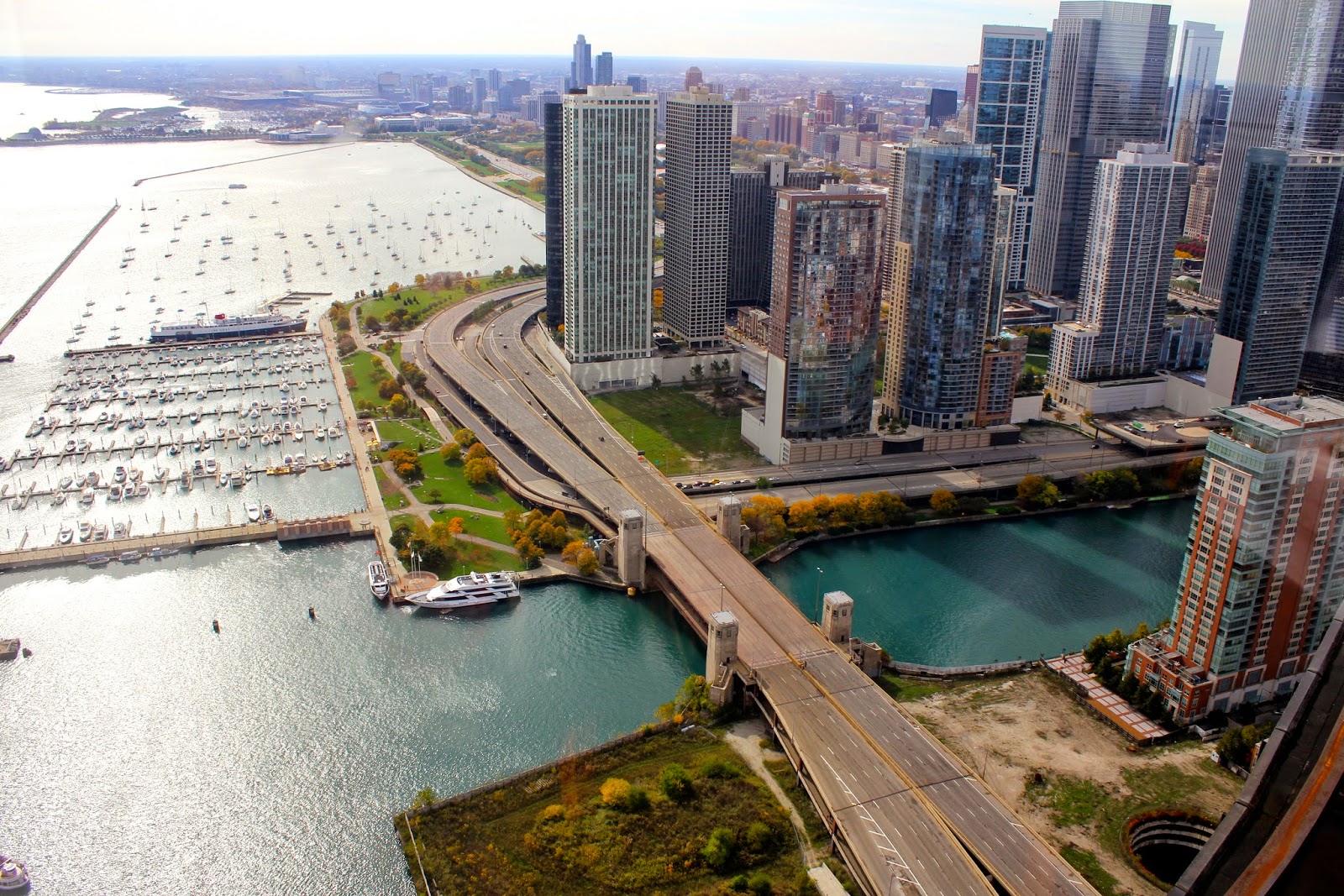 What, you can't see it? It's right there! Okay, let me zoom in a little for you: 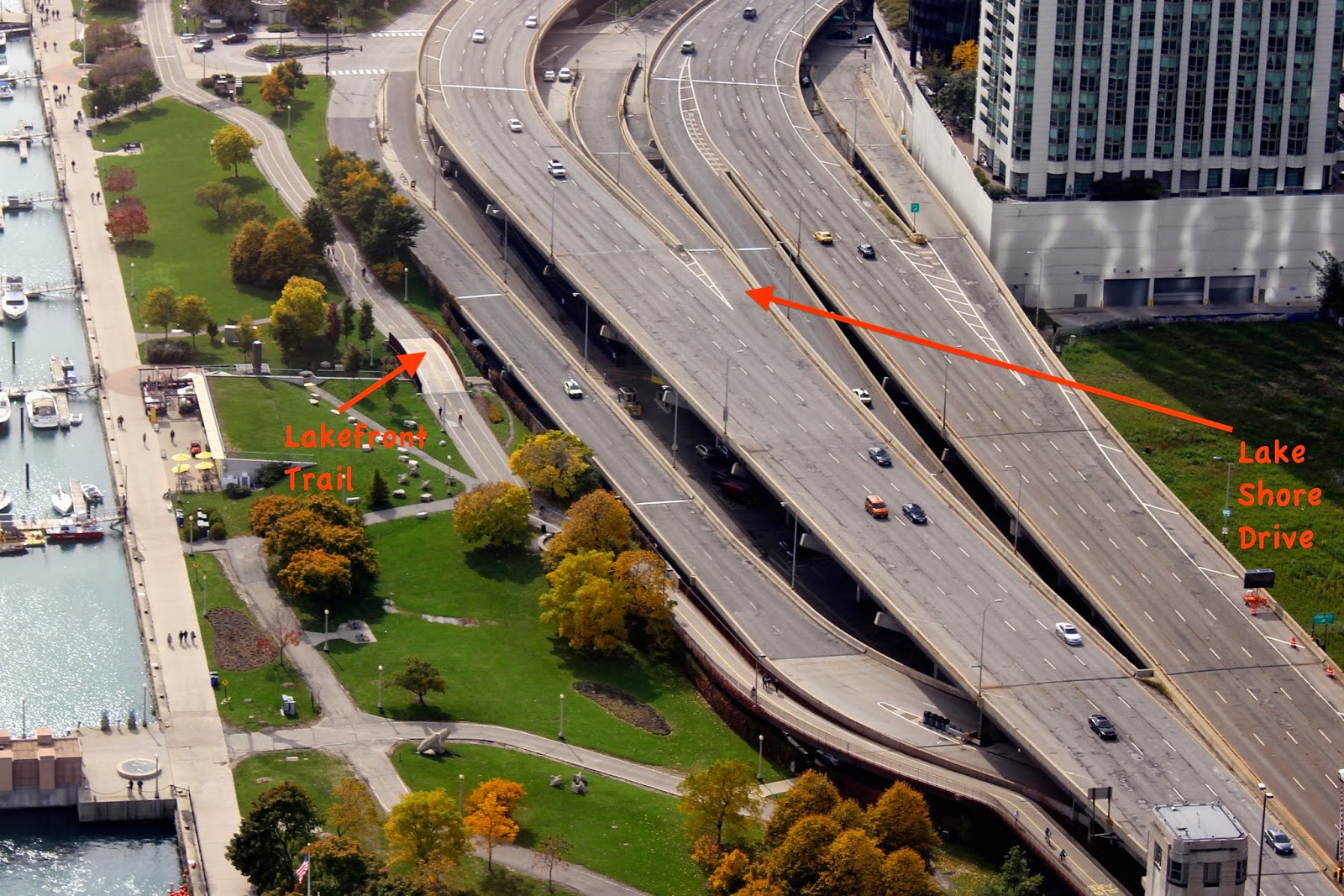 It's not that 16-lane wide mass of concrete taking up most of the right side of the photo -- it's that thin ribbon of asphalt to its left!
(More -->)

What struck me from this view point is seeing starkly how much width and space Lake Shore Drive takes up on our lake front, and how minuscule the Lakefront Trail is in comparison, in spite of its huge importance to so many people, and the many functions it serves.

In case the photo above isn't clear enough, I've drawn some lines to help you compare the widths: 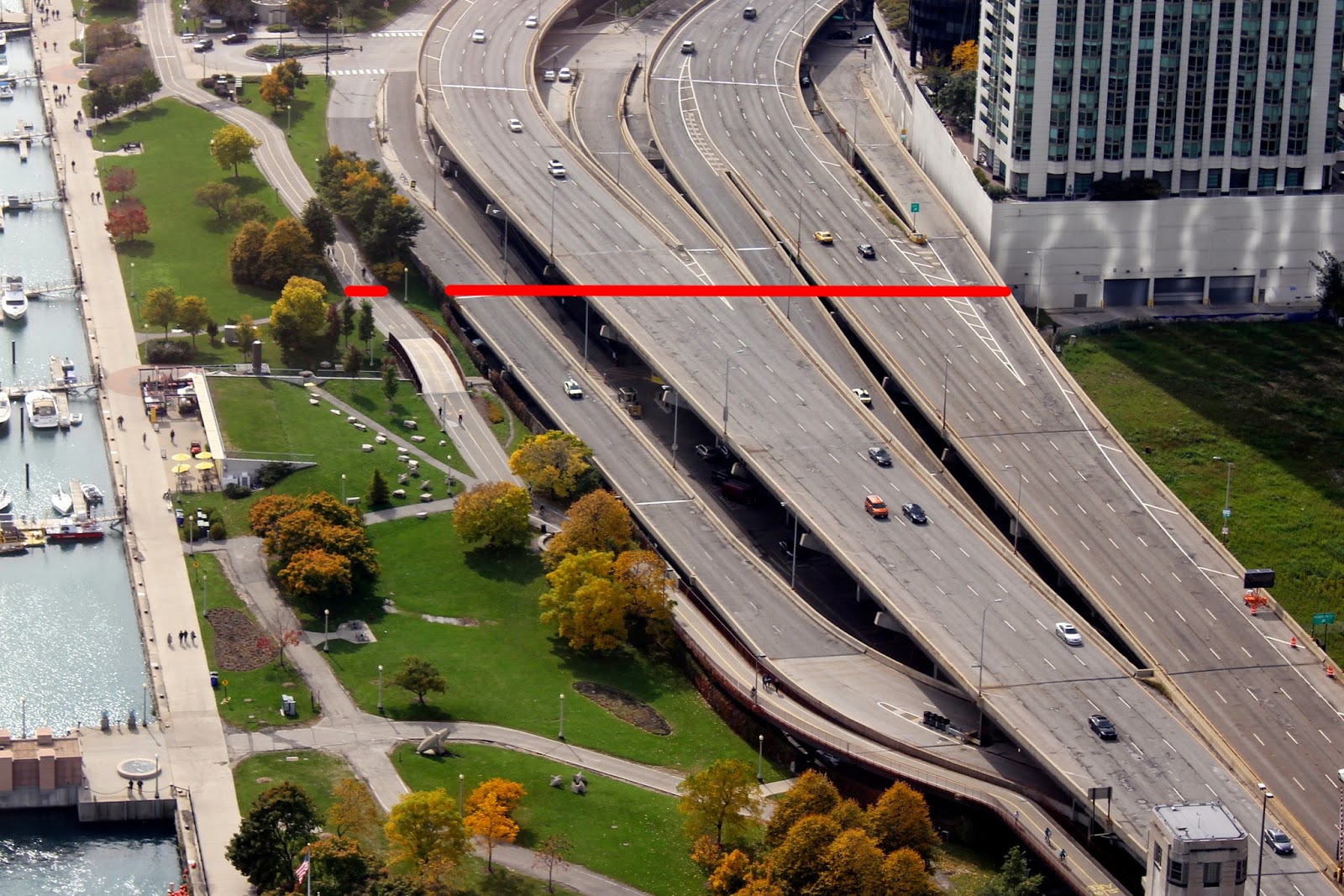 I mean, that's an obscenely huge difference in terms of money spent designing, engineering, building and maintaining these two pieces of infrastructure. And it's not like no one uses the Lakefront Trail. I took some photos the following weekend that reflect the popularity of the trail. This is the stretch just south of Fullerton: 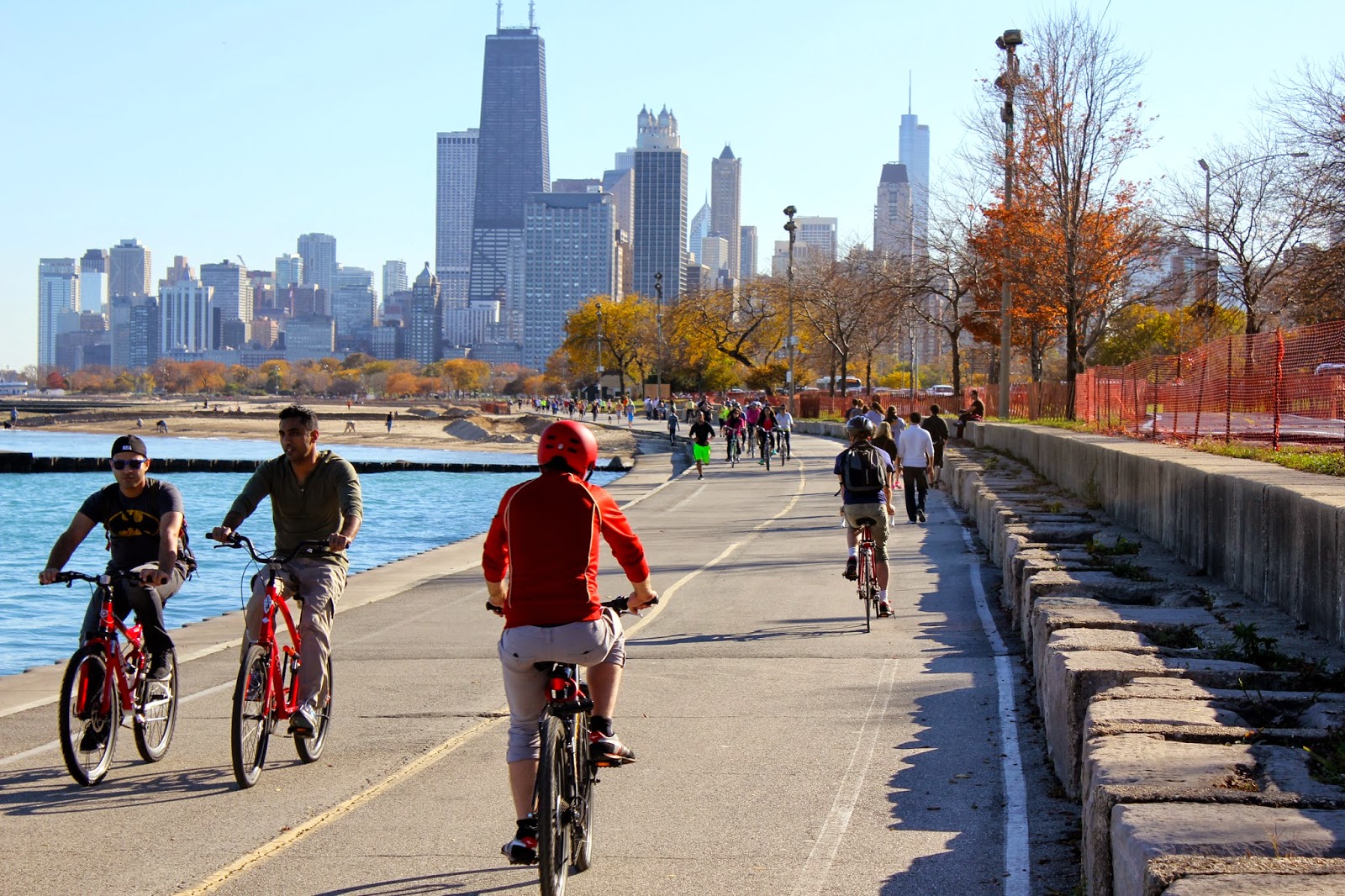 It's busy! This was a Saturday afternoon in late October. So it was a weekend, which is a popular time, and it was warmish and sunny, which encourages people to come out; however, it wasn't during the summer season, and it was weeks past Chicago Marathon event, so the hordes of runners were gone for the year. And yet, look at the masses.

In anticipation of a shoreline protection project that will fill in some of the lake to create new parkland here, the park district had just paved the "high trail" that people had been using for years during winter, when the regular Lakefront Trail was encased in ice: 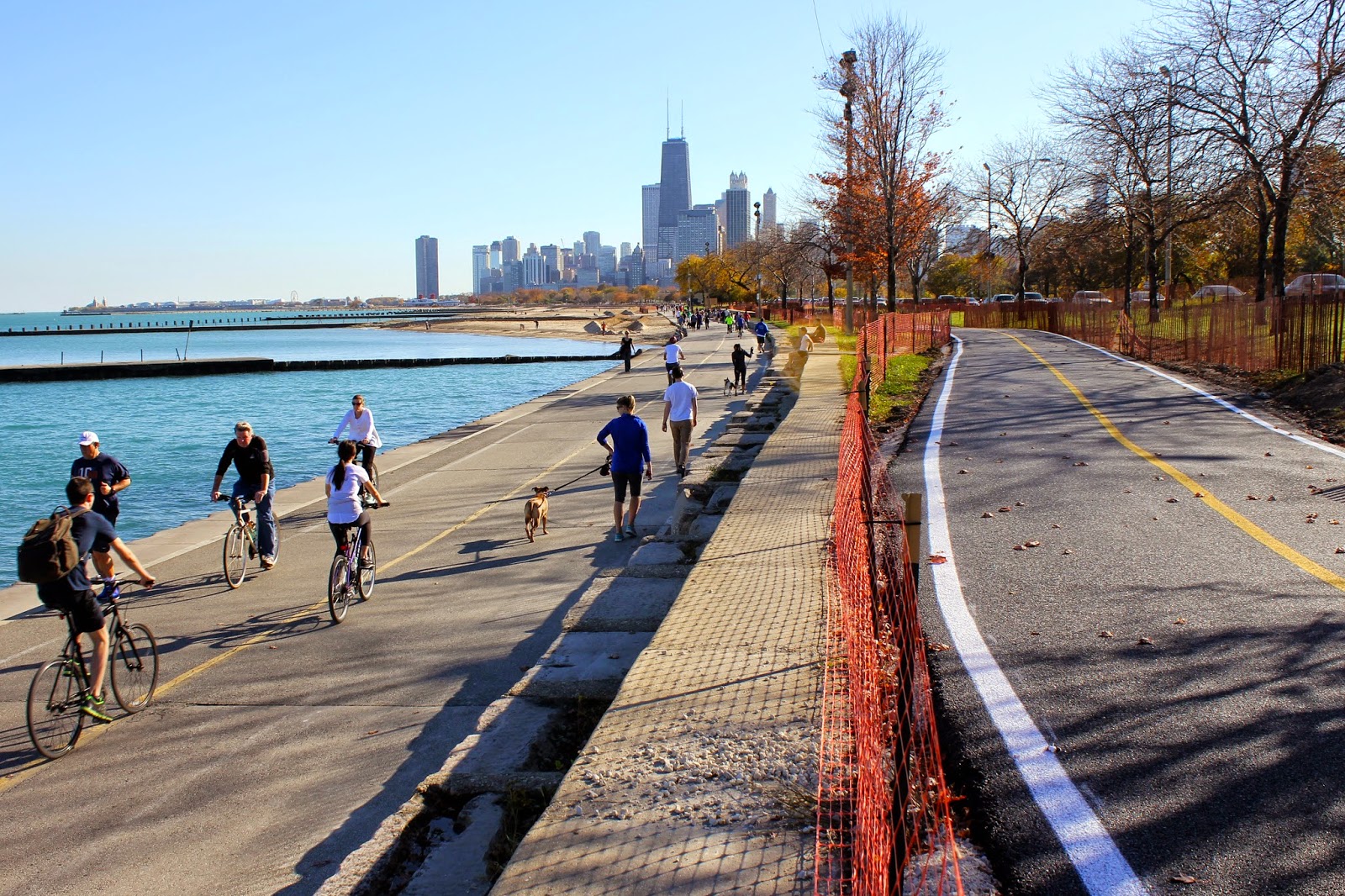 The unpaved, unofficial high trail was often very muddy and lumpy, so this smooth new version is a very welcome addition!

As you may know, we had a major wind storm hit Chicago on Friday, October 31. Record-breaking winds came whipping down Lake Michigan directly from the north, causing enormous waves to break on the shoreline, including onto the Lakefront Trail in many sections near Lincoln Park. Here's a picture I took in the early evening during the storm: 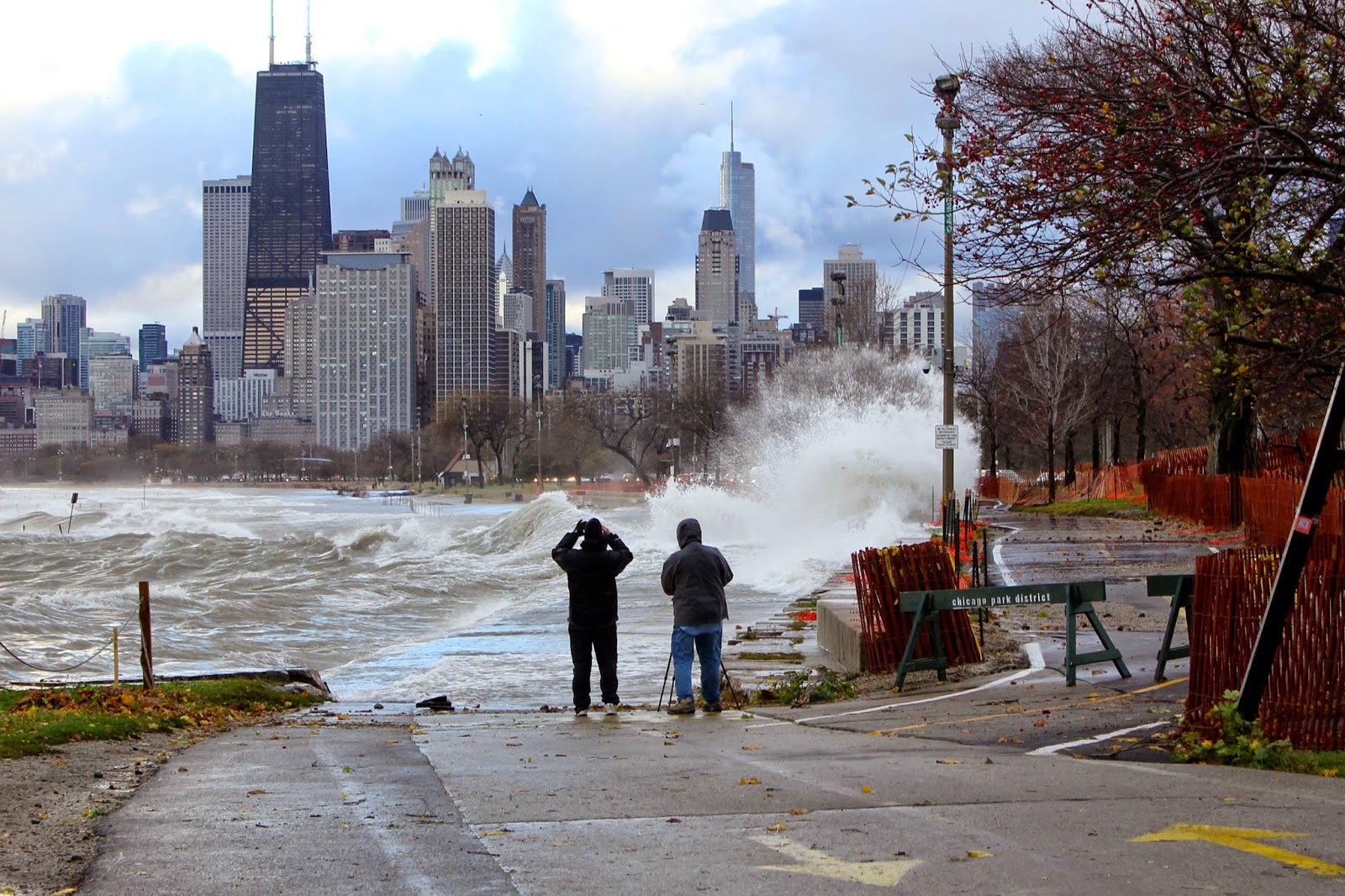 This is again just south of Fullerton. The regular Lakefront Trail is directly in front of the men in the picture, and even the new high trail was getting soaked.

Here's one of my photos of the massive waves hitting the beacon ruins on the promontory at North Avenue Beach: 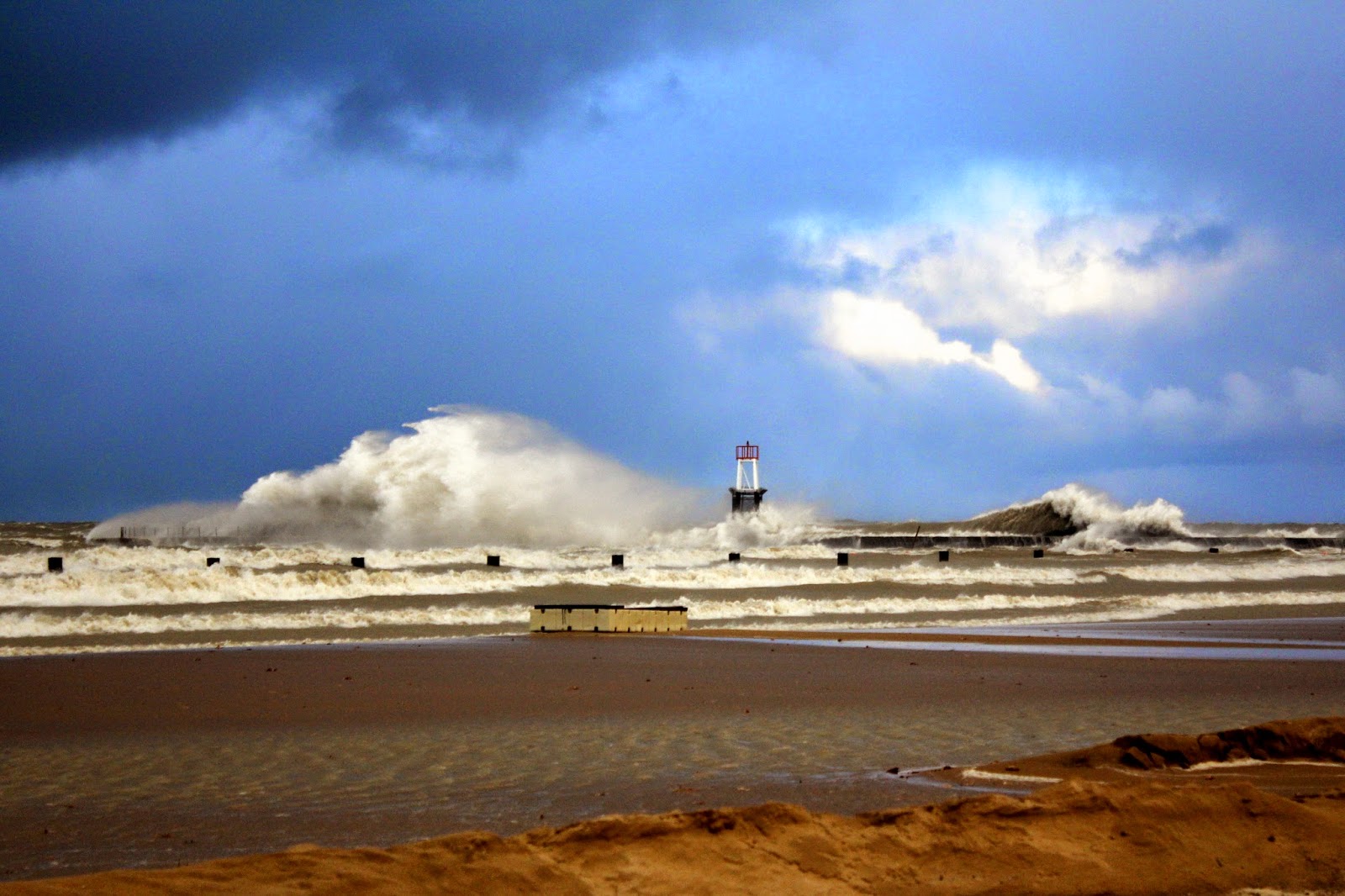 The plastic thing in the foreground is a chunk of a boardwalk that had been ripped away from its place by the waves.

So the morning after the storm, while on my Saturday morning run, I took a few pictures of the damage I saw. Just north of the Theater on the Lake at Fullerton, waves had eroded the sand and gravel under the trail and caused some chunks to crack off: 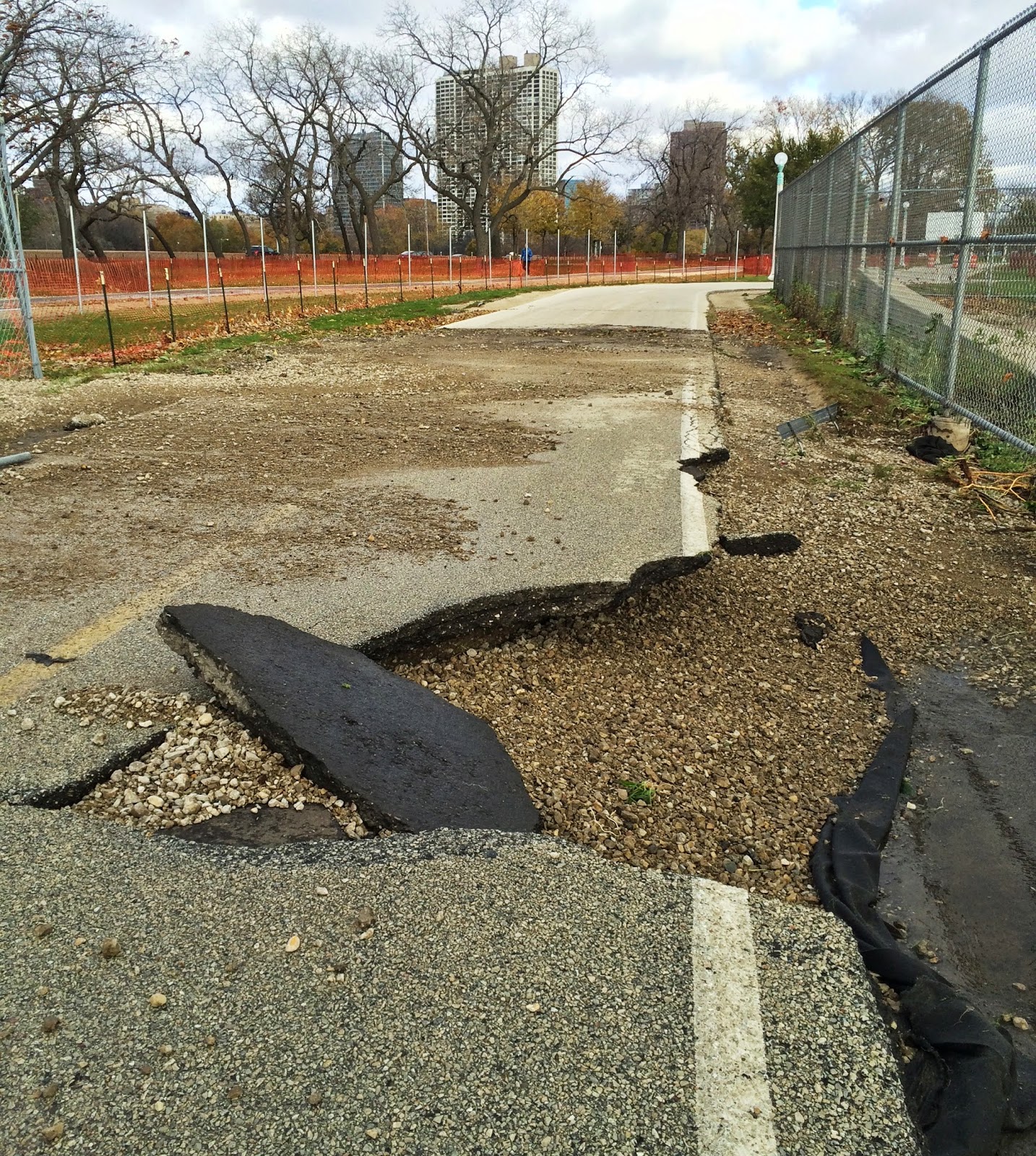 Along with broken fences and other debris, there was sand thickly covering the entire Lakefront Trail from edge to edge for most of the stretch between Fullerton and the North Avenue pedestrian bridge: 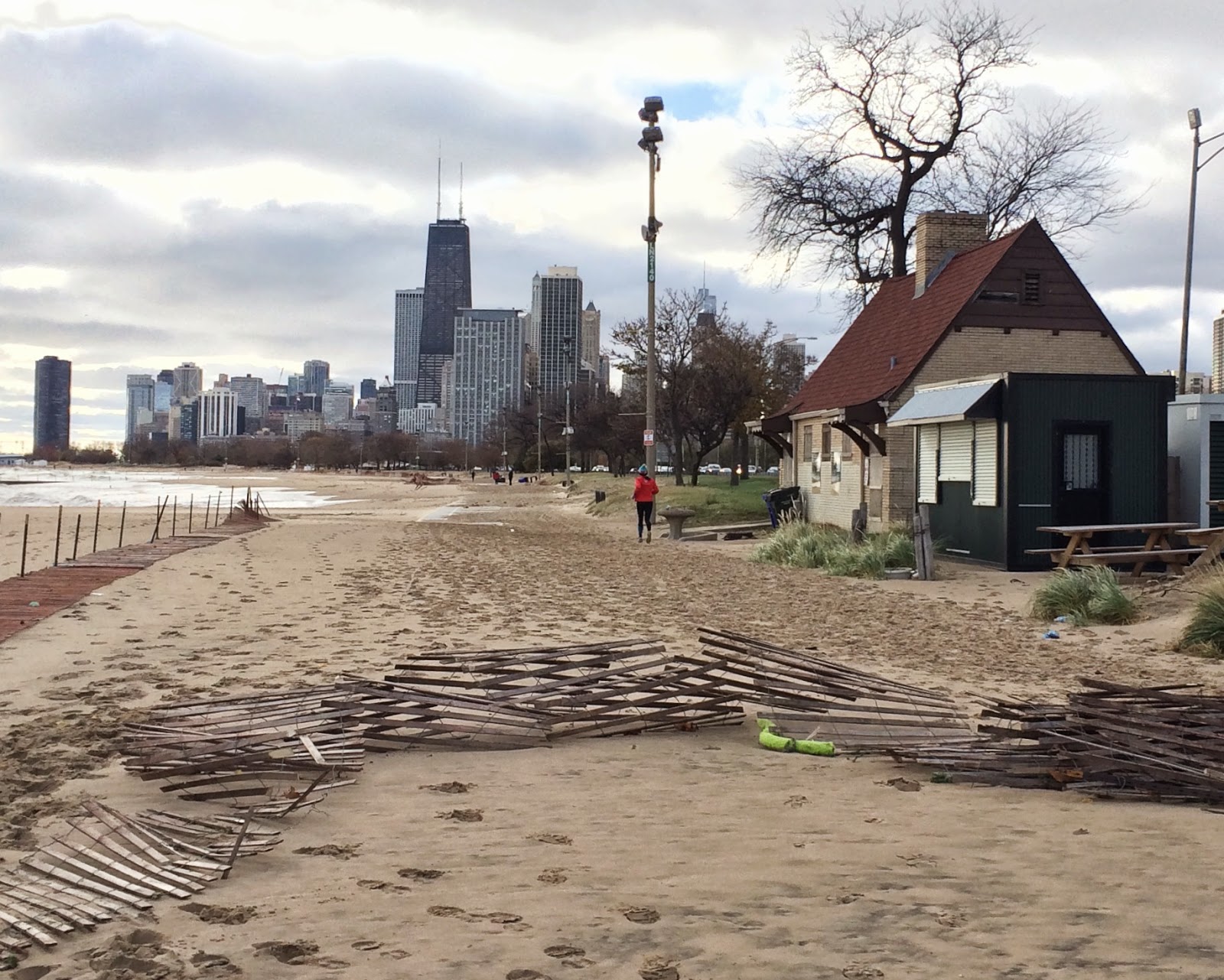 On Sunday morning, I headed south and saw the destruction of the trail along the Gold Coast, from Goethe to Division. The asphalt had been lifted up in sheets and then shuffled around like a deck of cards: 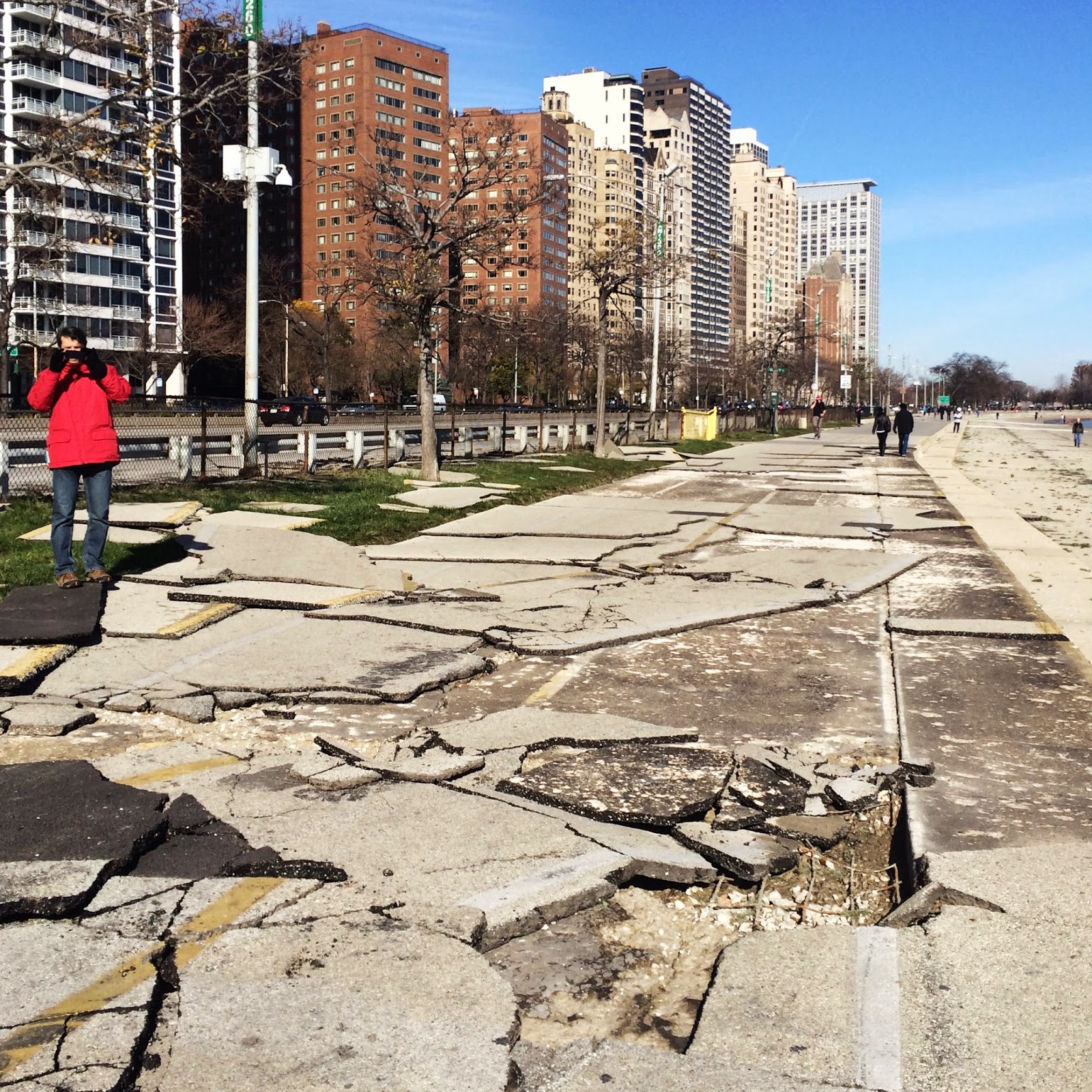 Close to Ohio Street Beach, where the construction of the new Navy Pier Flyover has begun, there was a pile of asphalt chunks, along with a wayward bike rack, torn fences, and plenty of seaweed: 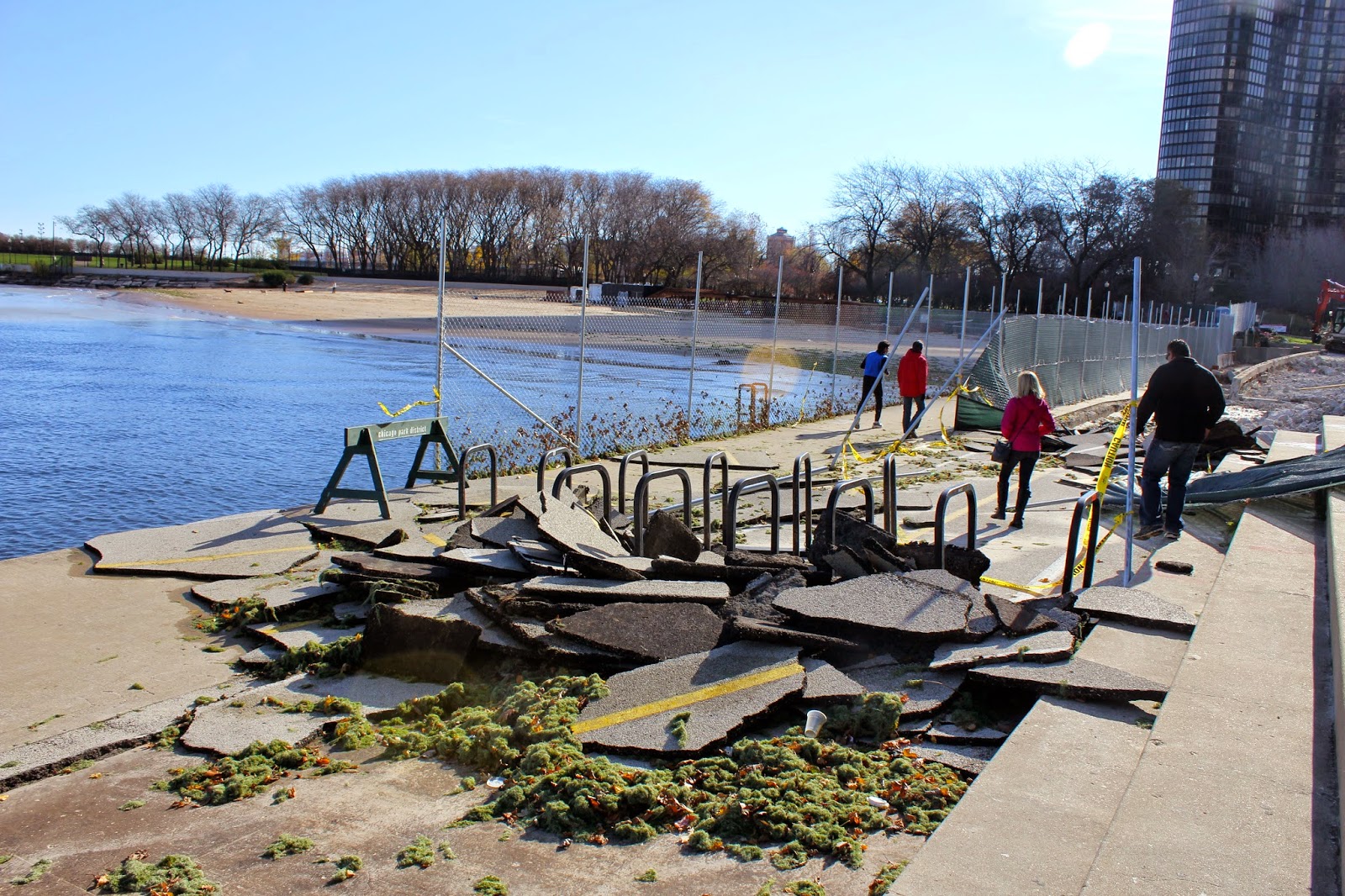 Fortunately, the Chicago Park District, which is in charge of maintaining the trail, sprang into action after the storm. By Sunday morning, there were already workers measuring and assessing the damage. By Wednesday, November 5, the sand had already been plowed away neatly into little hills off to the side: 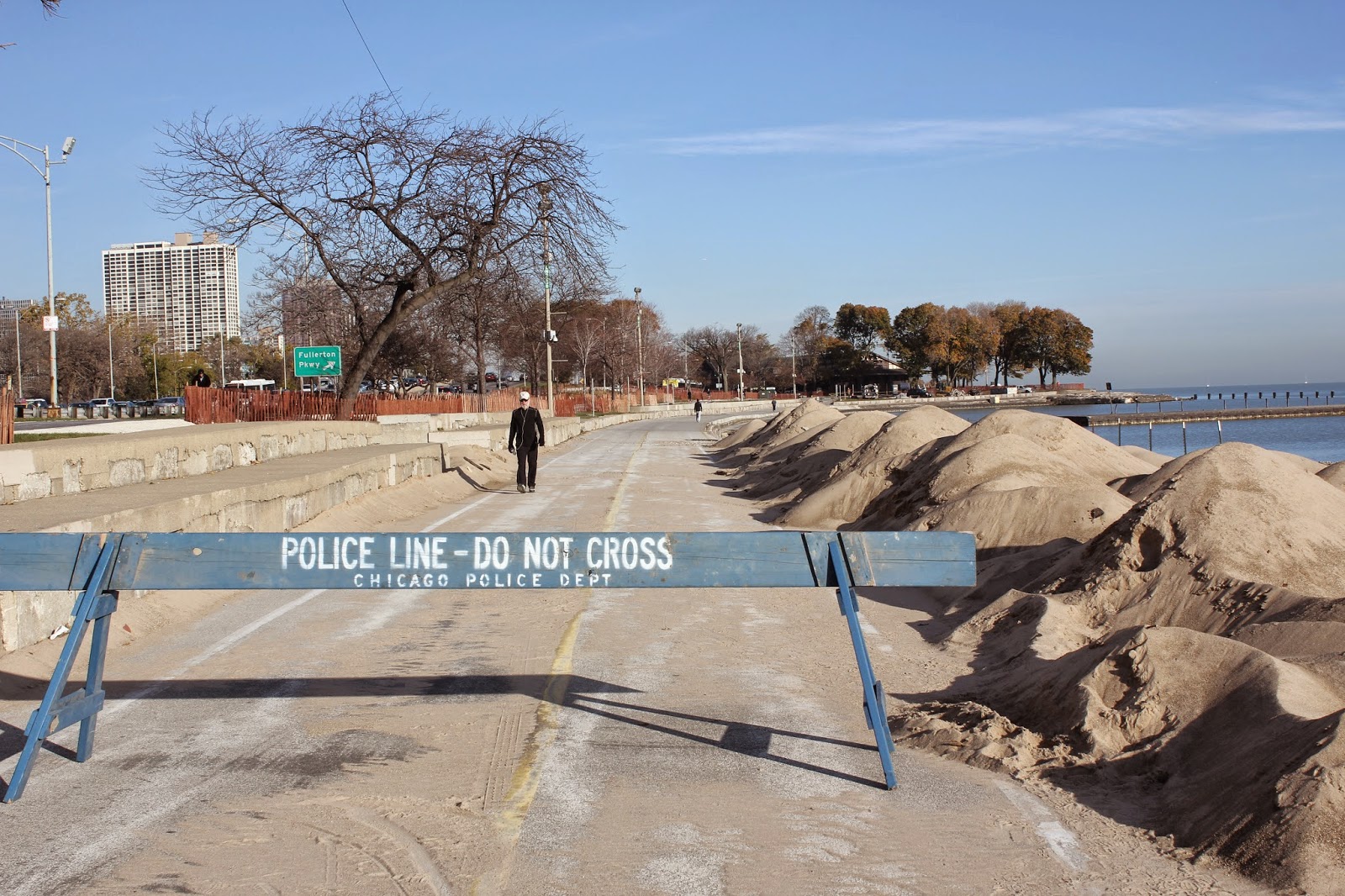 They had even begun re-surfacing the trail along the Gold Coast: 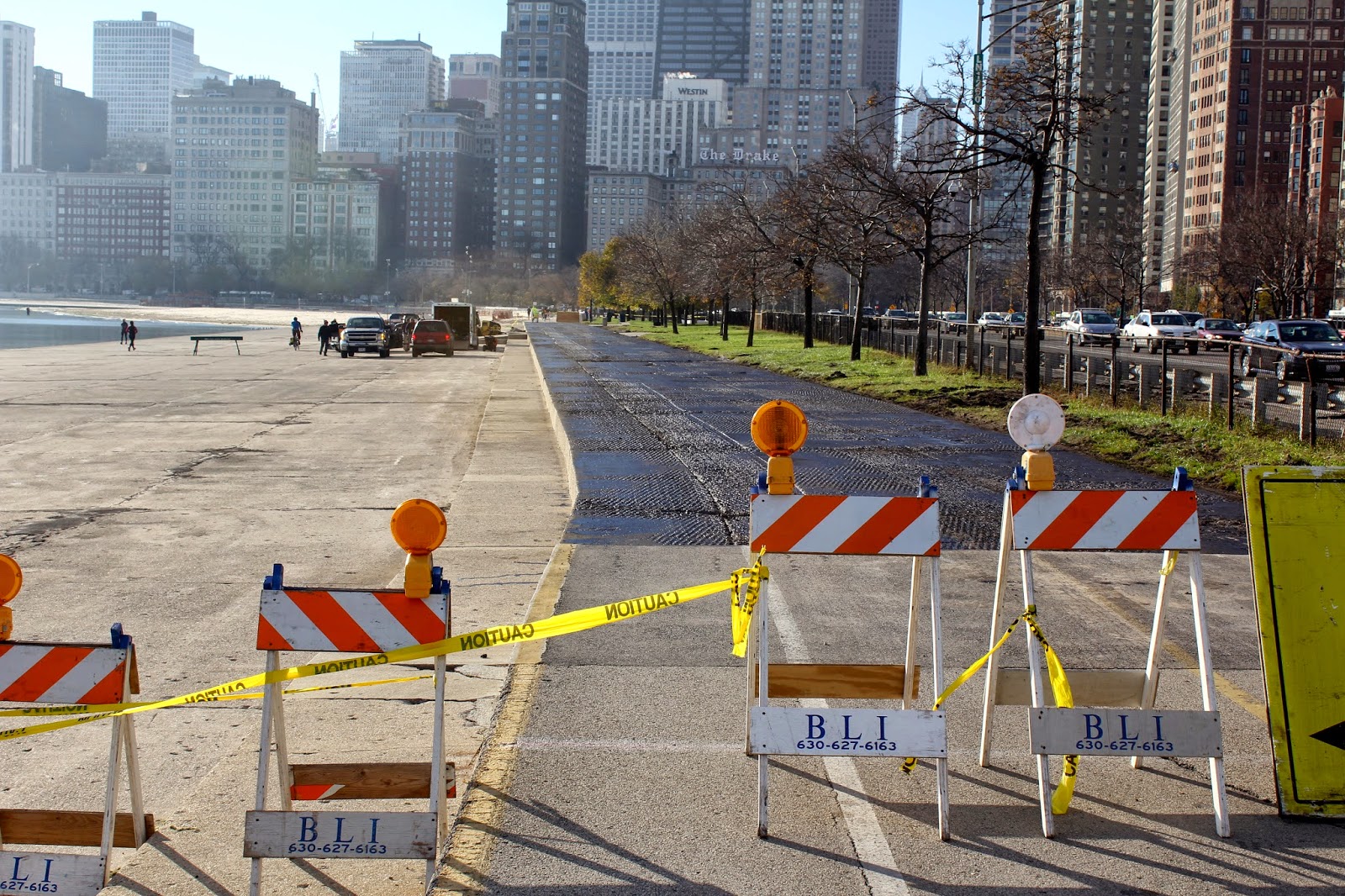 Calm and clean up after the storm on beautiful Lake Michigan. See you on the Lakefront Trail! 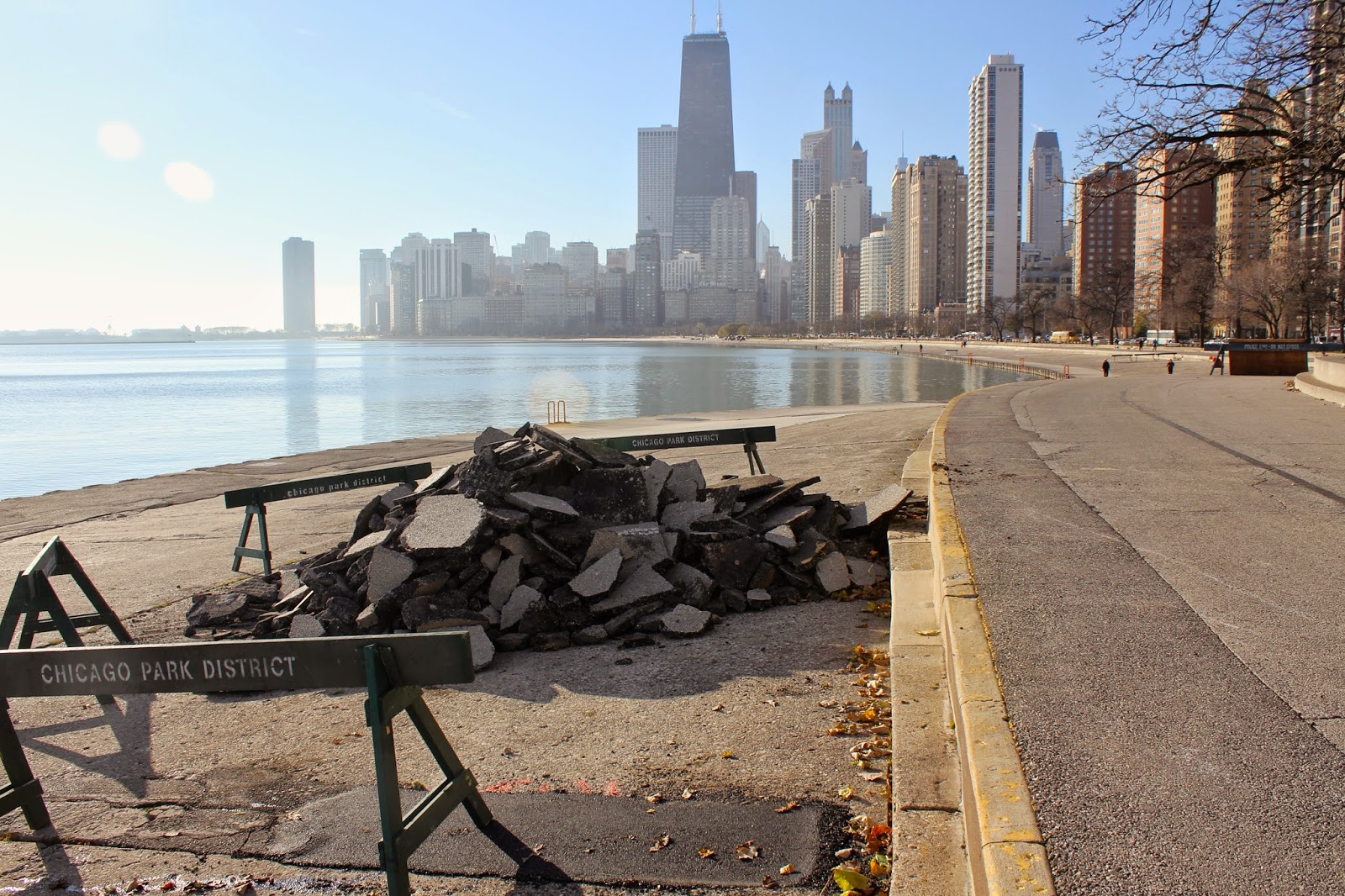