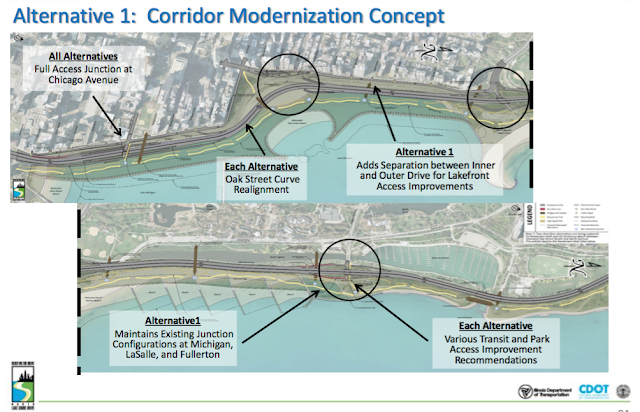 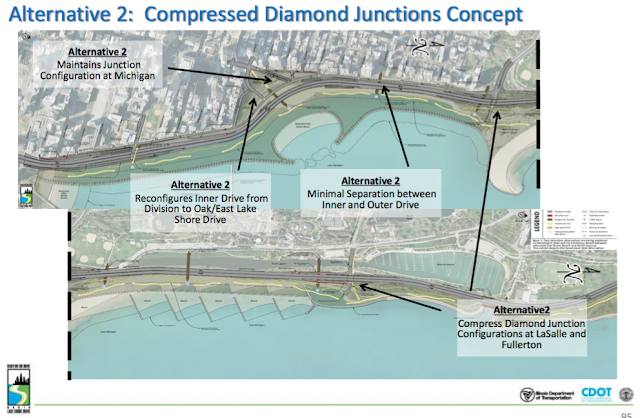 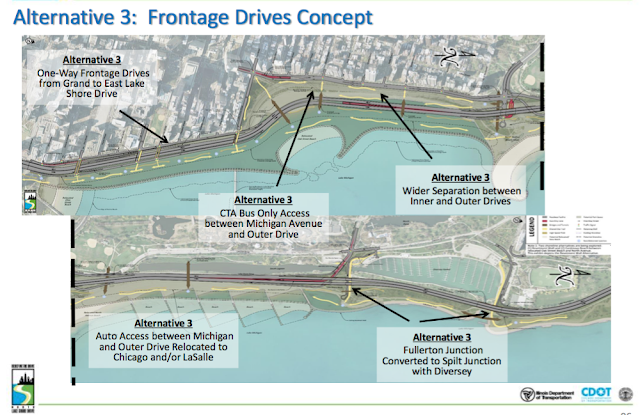 And to give you a better look at detail on one of the three alternatives, Alternative 1 from Ohio to Fullerton, I broke it up into more easily viewable sections:

So where is the project right now on the timeline? They're currently in the phase of looking at all the initial alternatives and doing a primary analysis and recommendation as to whether to continue an element for further study and consideration.

The reasons given for the eliminations included high expense when compared to alternatives, and for streetcar, inflexibility of the system, slow speeds, and need for east/west connections to other transit. I think only the elimination of the streetcar will be disappointing to some supporters .
What appears to have a strong chance of being among the future final recommendations, according to my reading of the alternatives presented?

1/ Reclaiming of land from the lake through infill

All of the alternatives show large-scale creation of new land the entire length from Ohio Street Beach to the southern end of North Avenue Beach area, near the North Boulevard underpass chess pavilion. Much of this new land would be used to add greenery and parkland on that entire stretch, which is sorely needed, as it is currently just windswept concrete.

This reclamation project would be a much bigger version of the just-completed Fullerton Avenue revetment project, in which six acres of new green space was created, and which has been very well received.

The new reclaimed land along the shoreline would also provide space to create ....

This has been the number one request of Lakefront Trail users on every survey, and in the input received by the LSD project team, and it will certainly happen as part of this project.

As a matter of fact, a Chicago Park District representative spoke at the meeting and said that they are planning to work on separating the Lakefront Trail even prior to the Lake Shore Drive project (which will take 5 years or more according to the official timeline, but my money is on 10 years). He said they will hold public meetings in late winter 2017 or spring 2017 to get public input on that.

The additional reclaimed land will also provide space for ....

Yes, the alternatives generally reflect that Outer Lake Shore Drive would be moved outward toward the lake, onto newly reclaimed land. One benefit of this is to put more distance between Outer LSD and the residences from Ohio Street to North Boulevard. The outward move is certainly needed in order to allow room for ...

Currently, the intersection is controlled by a traffic signal and allows turns at some times of the day and not others. The intersection causes long back ups in car (and bus) traffic every day and all three alternatives presented includes a new design that uses grade separation and ramps instead of a traffic signal in order to address the problem.

Right now, outer LSD makes two fairly sharp turns at Oak Street beach, and because drivers ignore the posted speed limit and take it far too fast, there are many crashes in this section; therefore, it appears that all the design plans include using reclaimed land to straighten out the curve.
I know what you're thinking: Straightening the roadway will make drivers feel that it's safe for them to drive even faster, so won't that just lead to an equal number of crashes in the longer run? That's my thought, too.

Lake Shore Drive is part of Chicago's boulevard system and under the 1972 Lakefront Plan of Chicago, any changes must be consistent with its retaining its parkway nature. It should not be redesigned or re-built to highway standards that encourage high speeds. We discussed this issue at length in our follow up input letter to the project team, which you can read on this post, and we will definitely be revisiting those issues in the future.

6/ Some level of prioritization for buses

When Bike Walk Lincoln Park provided our list of problems that we believe should be tackled in the redesign project, our very first comment was that buses are stuck in traffic with other motor vehicles, and they should be be given priority, in order to encourage more people to shift to this highly efficient way of transportation in the corridor.

Indeed, it looks like solving that issue will be an important part of the redesign. The alternatives that were presented included: a lane configuration that would allow buses to ride on the right shoulder during peak traffic times; a separate but dedicated busway off of Lake Shore Drive, closer to the urban edge; and "managed lanes" either on the left or right.

Much more detail on all these options is on the project website, and there will be more discussion and opportunity to weigh in in the future.

This is one of the most exciting parts of the project to me. The current Lake Shore Drive design is not in compliance with the 1973 Lake Michigan and Chicago Lakefront Protection law requiring pedestrian access points every 1/4 mile. Furthermore, many of the existing ones are in terrible shape and not in compliance with laws requiring universal accessibility. The proposed alternatives all reflect improvements for all these issues.

The proposals include newly designed bike and pedestrian tunnels and bridges that replace the current ones at Chicago Avenue, Oak Street, and Division Street. (Some would be one or two blocks from their current location.)

The alternatives also reflect the addition of not just one, but two proposed new access points between Fullerton Parkway Bridge and the North Avenue Pedestrian bridge (you can view this in the above image "Alternative 1, section from North Avenue Beach to Fullerton").  Fullerton and North Avenue are two of the city's three Lakefront Trail access points with the highest volume of users, and the additional ways to get people from the Lincoln Park Zoo area to the Lakefront Trail and beach would be most welcome.

As you can see from the Alternative 1 drawings above, one of the proposed access points would be just south of the Fullerton Parkway bridge, and another one half way down the South Lagoon. In both cases, they would consist of a tunnel under LSD, and then a bridge over the lagoon. Also interesting to see is that the current North Avenue pedestrian bridge would be converted into a tunnel, although I'm not sure why.

Again, there are also plenty of illustrations of possible changes further north, and I encourage you to view all those in the numerous documents on the project website.

So, what do you think of all this? In 2017, there will be another meeting for the task force members as well as another public meeting, so stay tuned for that.

The project team is not officially soliciting input at this time; however, if you have any comments that you're burning to share, I encourage you to send them to the project anyway via e-mail to info@northlakeshoredrive.org (in spite of the anonymous-sounding e-mail address, I assure you that those e-mails are read and not just sent to some virtual garbage bin) or by using their online comment form.

And of course, we'd like to hear what you say in the comments below as well! Or e-mail us at bikewalklincolnpark@gmail.com and tweet us @BikeWalkLP .

Posted by Bike Walk Lincoln Park at 11:01 AM