We’ve been thinking lately about the idea of democracy and equality in our streets. Not in the sense of the Occupy Wall Street movement, but about whether all people who use our streets are treated equally.

We like to talk about how everyone is equal in the United States, and we’re supposedly a classless society. Yet, when we look at our streets, there are definitely classes of street users, and automobile drivers are the ones invited into first class.

Under our system, a person driving a motor vehicle is given the most space and the most advantages on our streets. But not everyone can or wants to drive a car. There are those who are not old enough yet, or don’t have the financial resources needed to own or operate a car. There are people who have disabilities that restrict or prohibit their ability to drive. In addition, more people are choosing not to own a car or use it for many of their trips,  based on economics, convenience, concern for the environment, to get in a little exercise, or all of the above. In Chicago, about 30 percent of households don’t own an automobile. When those 30 percent take a bus or ride a bike, they shouldn’t suddenly become second-class citizens. 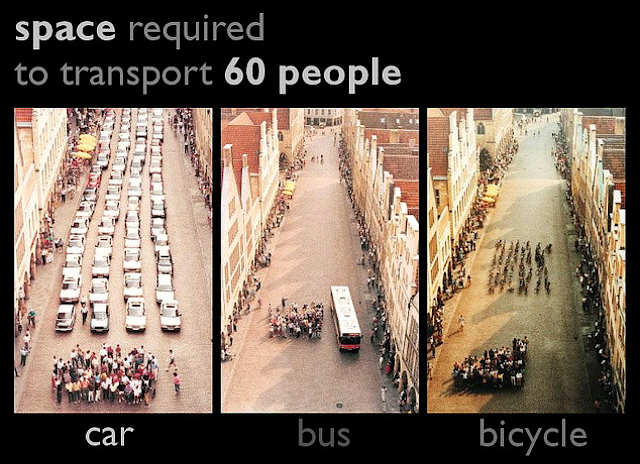 Look at the poster above. It's used by the Muenster, Germany city planners to illustrate difference in efficiencies for modes of transport. It's pretty amazing to see so graphically how much space is taken up by 60 people in 60 cars, and compare it to the tiny amount used by 60 people in a bus or on bicycles. A hulking two-ton cocoon of metal provides a lot of comforts for the 150-pound driver operating his personal vehicle, but the tradeoff to society is that it also uses massively more amounts of public space than a bicyclist, and even more than a bus rider.

If we lived in a true democracy where all people were treated equally, every person would be given an equal amount of space on the street, no matter which mode of transport they’re using, as seen in the First Avenue picture above. Our streets, after all, are public spaces, meant for all people. And yet, what do we have currently in Chicago? Not enough accommodations for modes of transport other than private vehicles.

Buses nearly always have to use the same lanes that cars do, and they’re given no preference. One bus is only given the street space of about three private motor vehicles, carrying three people, even though it may have 60 passengers. That bus should be given 20 times the street space that it is given, under a true democracy. That’s one reason we need dedicated bus lanes.

Likewise, people who choose to ride a bicycle on Chicago’s streets should be treated as equals to those in automobiles. (If you find that statement shocking, ask yourself why: Why should someone riding a bike to work or to go shopping not be given equally respectful treatment as a person driving their car to the same destination?) But bicyclists are rarely given any dedicated road space.

Instead they’re squeezed in “where there’s room”, even though they take up about a tiny fraction of the space of a person in a car. This has to change. Safe bikeways that clearly communicate that people on bikes are equal citizens are sorely needed. And they’re coming, thank goodness.

We’re looking forward to the day bloggers in other cities feature pictures of Chicago as good examples of balancing the rights of all users of the street. Because it’s one thing to talk about values like democracy and equality in abstract terms, and it’s another to actually make them a reality.
Posted by Bike Walk Lincoln Park at 3:09 PM