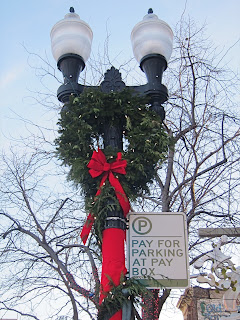 You may have noticed that we try to keep upbeat on this blog, but there’s one topic that’s really testing our abilities to remain chipper: Chicago’s parking meter lease deal.

December 4, 2011 marks the three-year anniversary of our city council approving the deal that traded our right to collect revenue on parking meters in exchange for a large-but-not-large-enough lump sum of money. Why are we talking about this parking meter deal on a bike/walk blog? We’ll get to that.

First, let’s review some basics (all reference links are provided at the end of the post):


According to most recent documents posted on the city’s website, as of June 30, 2011, 2.5 years into the deal, we had already spent $879 million of the money we received. It’s true that much of the money was used to pay off big debts the city had incurred in the years prior to 2008, including projects like building Millennium Park. That’s money that we owed, and paid off, and is now off the books. However, it’s disheartening to realize that three-quarters of the money from the lease deal is already spent, with 96% of the lease term still in front of us (72 more years!).

Most disturbing is that $400 million was specifically earmarked to be a “revenue replacement fund”, the investment earnings on which was to provide a steady stream of approximately $20 million a year to make up for the fact that we’re not earning that money any longer from our parking meters. Unfortunately, in 2010, contrary to the stated plan, $210 million was transferred out of that fund for other uses, so we only had $178 million left, as of June 30, 2011. That’s not going to earn enough to replace our lost parking meter revenue. Again, for the next 72 years.

But here’s the part that affects us most as pedestrians and bicyclists: Under the lease deal, the city retains ownership of the actual street, the physical land on which people park. However, CPM LLC now has the lawful right to earn parking fees on every single 20-foot stretch of curb that was already a metered parking space on December 4, 2008.

So now, if the city planners feel there’s a need to eliminate a metered parking space, they cannot do so unless they create a new comparable space nearby to make up for the lost one, or they need to negotiate with CPM LLC and pay cold, hard cash to make up for CPM LLC’s lost revenue.

How much is each spot valued? In a very rough calculation, CPM LLC paid us approximately $32,000 in 2008 for each of the existing 36,000 parking spaces. (If this is way off base, please let us know in the comments section, or e-mail us at bikewalklincolnpark@gmail.com ! We’re not finance whizzes, just lay people with a calculator.)

So if visibility for pedestrians at a crosswalk would be improved by removing one parking space on either side of the crossing, on either side of the street, city planners now have to create four new metered spots in the area to make up for it, or negotiate and pay in the range of $128,000 in cash to CPM LLC. 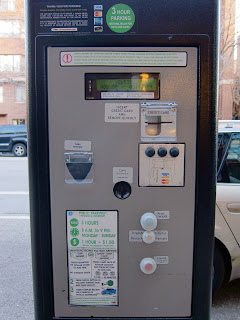 Or let’s say it would be beneficial to remove parking to install a protected bike lane on a half-mile stretch of street that currently has 25 metered parking spaces on each side: City planners would have to create 50 new metered spaces somewhere else close by, or negotiate and pay CPM LLC in the range of, um, wow, $1.6 million.

You can see why the parking meter lease deal will make it very difficult for our current  forward-thinking planners to shape our city’s streets in order to serve the needs of its citizens. For the next 72 years. Ouch.

OK, think positive, think pro-active. There must be something we can do in response to this. Well, after receiving heavy criticism, William Blair and Company, the group that advised the Daley folks through the parking meter lease deal process, published a document defending their recommendations.

Much of the document seems like a desperate attempt to shine a good light on an all-around unfortunate situation, but one of their arguments resonated with us: The city’s residents got screwed under the lease deal -- we’re paraphrasing from the report here -- but only if you assume that the parking meters will continue to generate equal or increasing amounts of revenue in the future, which is not necessarily the case. It’s worth quoting from the Blair report at length:

The concession agreement requires [CPM LLC] to operate the System for 75 years, regardless of changes in population, economic activity, technology, patterns of behavior, and the myriad other factors that might affect the economic value of the System. There was no such thing as a parking meter 75 years ago -- the first ones were installed in 1935. ... A lot can and will change in 75 years. ... There is substantial uncertainty associated with the future availability and cost of motor fuel, vehicle-sourced pollution and emissions, improvements in public transportation, and so on. Just as the application of improved meter technology may enhance the value of the System, it is also true that technological innovations may adversely impact the value of the System. For example, it may be that individual motor vehicles are replaced by other forms of personal transportation that do not require as much or even any street parking. [CPM LLC] has assumed all risks associated with declines in System utilization, including declines related to rate increases and those driven by technology, fuel costs, attractive transportation alternatives and other factors.

So if you want to be a good citizen and maximize Chicago’s outcome from the parking meter lease deal, do your part and avoid metered parking spots whenever you can. The money you spend locally on walking shoes, bike equipment and CTA fare stays right here in our city. Let’s minimize the gains of Morgan Stanley and the Abu Dhabi investors by choosing active transportation. Remember, every time you feed the meter, they win again.

More reading on the topic, if you can stomach it:

The Reader’s article summarizing the timeline of the deal.

The City of Chicago’s website page that has links to all the asset lease agreements, including the parking meter lease contract, as well as updated financial disclosure documents.

Link directly to PDF of the document from William Blair and Company defending its recommendations.