Do you remember streetcars in Chicago? Probably not.  In the first half of the twentieth century, there were dozens of streetcar lines that reached into all corners of the city. They were a very popular and efficient means of transportation; however, as automobiles took over Chicago’s streets, the number of streetcar lines diminished and then were completely eliminated by the 1950s. In 1957, Lincoln Park’s streetcar lines #22 Clark and #36 Broadway were among the last to be “bustituted”  -- substituted with buses. (Read more at the Wikipedia site for Chicago Surface Lines.)

John Krause, an active member and supporter of Bike Walk Lincoln Park, is trying to change that. He’s the founder of the Chicago Streetcar Renaissance, which is seeking to use the streetcar to bring back Chicago.

Notice how I didn’t just say he’s “seeking to bring the streetcar back to Chicago”. On the Chicago Streetcar Renaissance website and related blog, John makes the argument that a streetcar is a modern, quiet, clean, efficient means of transportation. He says, “When they're not stuck in traffic with cars, streetcars can provide almost the capacity of an elevated train but at one-tenth the cost.”   But beyond that, streetcars serve as a catalyst for transforming an entire area, by reducing cars and car traffic in a neighborhood and attracting PEOPLE instead: “It's a proven way to grow the economy and the population while actually reducing congestion."
Check out the two sites linked above for lots more information. Then join the conversation live, this week. John is looking to build a coalition of supporters to help make his exciting vision into a reality. He’s holding the Chicago Streetcar Renaissance kickoff event this coming Thursday, May 10 from 6:00 pm to 9:00 pm at Vapiano’s on Clark (details below). The event is open to anyone and everyone – that’s you! It’s a free event with a cash bar. Come chat with John and other likeminded people who are interested in making our city more liveable.

Post questions and comments below, or reach John directly at jck at chicagostreetcar dot com

Here's a link to the e-mail invite with full details. See you there! 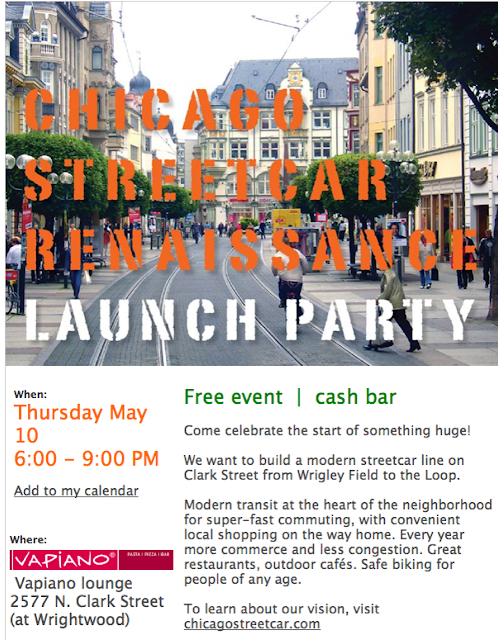