Thoughts on "Lincoln Park Plaza" at the Children's Memorial site


Recently, Alderman Michele Smith held the latest of several community meetings to facilitate communications between all parties about the ongoing design of the now-vacated Children's Memorial Hospital site at Lincoln, Fullerton and Halsted. I encourage you to review the video of the meeting and the PowerPoint presentation on this link to her newsletter in order to get the complete overview of the current proposal.

Here's what the site would look like when completed, as viewed from the north, on Lincoln Avenue approaching Fullerton. (All images in this post are taken from the presentation, prepared by architects Antunovich Associates, SOM, and developers McCaffrey Interests.) 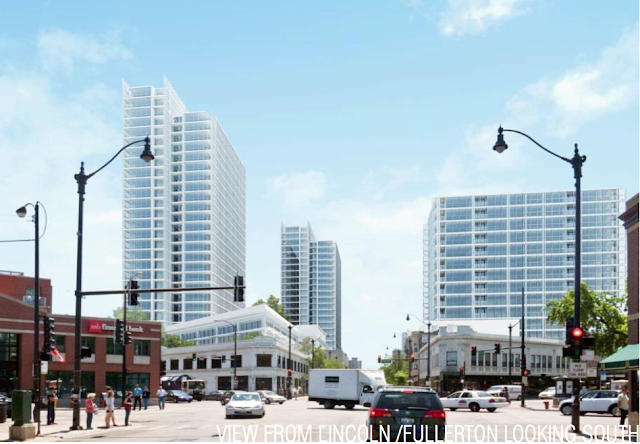 More after the jump.

Here's the overview of the proposed design from an aerial view. 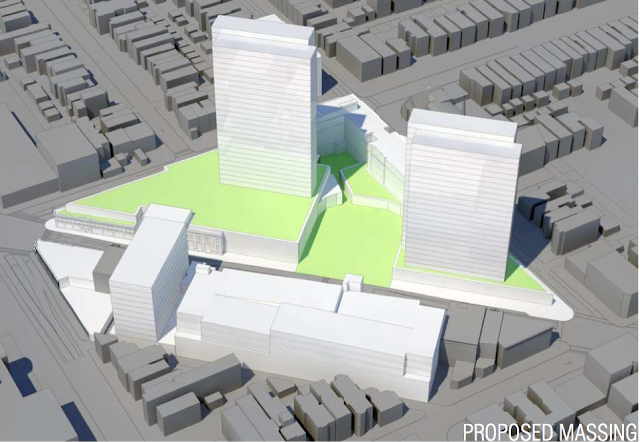 There's a lot to discuss about the plan, but today I want to focus on whether the site will serve as a "gathering place" for Lincoln Park residents. Alderman Smith has talked about how she'd like the final result to serve as a town square for our ward, something that we strongly support.

Although Lincoln Park has great cultural destinations like the zoo and the Nature Museum, great green spaces, and great retail corridors, it doesn't really have an outdoor plaza where people can gather to chat and relax as a community. In Chicago, the best example would be Lincoln Square's Giddings Plaza, where neighborhood people sit on benches to enjoy gelato while kids splash their hands in the fountain and bluegrass bands play a few tunes.

The Children's Memorial site presentation acknowledges that one community directive for the new development is to provide "active usable open space identifialble as the center of Lincoln Park." 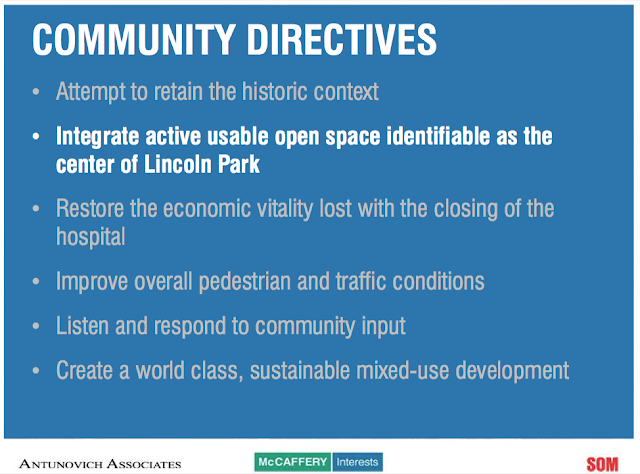 And in response, this slide shows the areas that are to serve as that space. 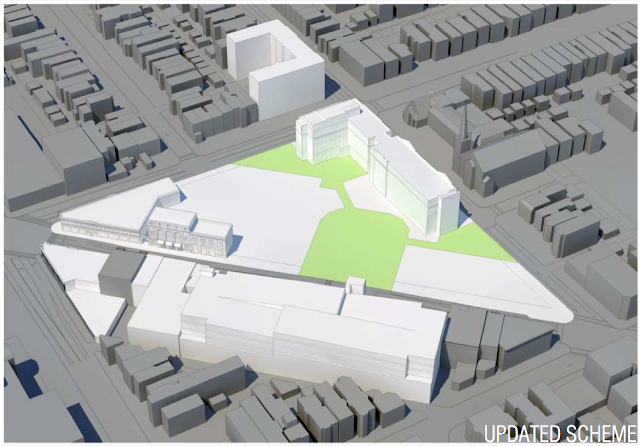 In this slide, the oval area is the largest of the three spaces, and is even given the name "Lincoln Park Plaza", so that will be our focus. 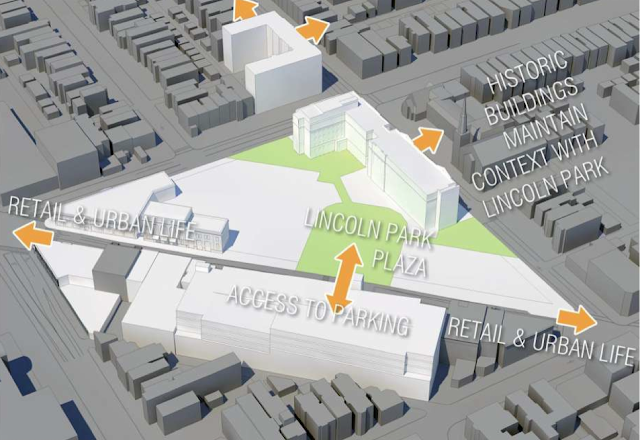 The drawing of the proposed plaza looks lovely at first glance, with its fountain, benches, grassy patches and flowering trees. There's lots of potential retail at the edges, including a cafe with colorful umbrellas. 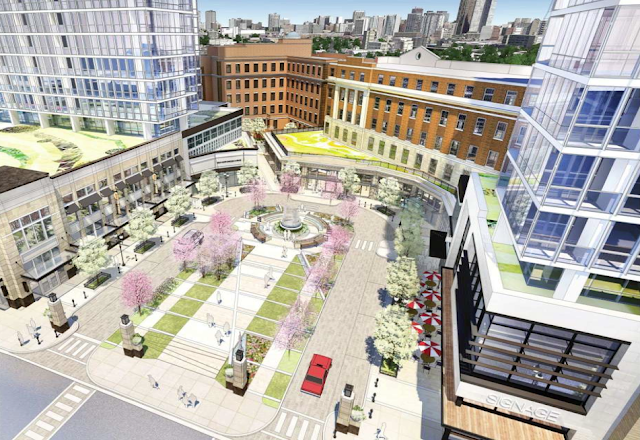 But then you start noticing the details: The fountain and grassy area is surrounded on three sides by a big circular driveway for motor vehicles. In addition to the moving lane for vehicular traffic, there are at least 12 parking spots for cars, vans and SUVs. (Note there are 761 parking spaces planned for the parking garage directly across the street, as well as all the metered spots on Lincoln, at least for the next 72 years.)

Only two vehicles are shown on the drawing, with one even half hidden by a flowering tree. Why don't the designers show the parking spots full of vehicles? Because they would point out the reality that half of this proposed plaza is given over to motorized vehicles, to the severe detriment of the quality of the space.

To give you a better idea of what the plaza would look like with vehicles present, I've sketched them in. It's somewhat crude, but it may help you see my point. 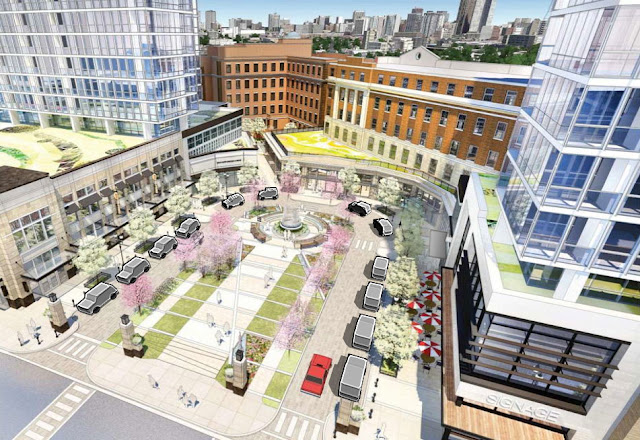 You can see the effect that the presence of motor vehicles has on the scene. What first looked like an actual city square now looks more like a crowded suburban strip mall. Instead of people strolling from a store on one side to the other, they'll have to squeeze through a row of parked cars and then check for moving cars, and then do it again on the other side. The people sitting in the cafe under the red and white striped umbrellas would not be afforded a charming scene of children playing at a fountain, but instead will be looking at the sides of parked SUVs.

But will there even be children playing at this fountain? The detail drawing of the center area looks very nice, when there's only grass, flowers, people and buildings in the scene. 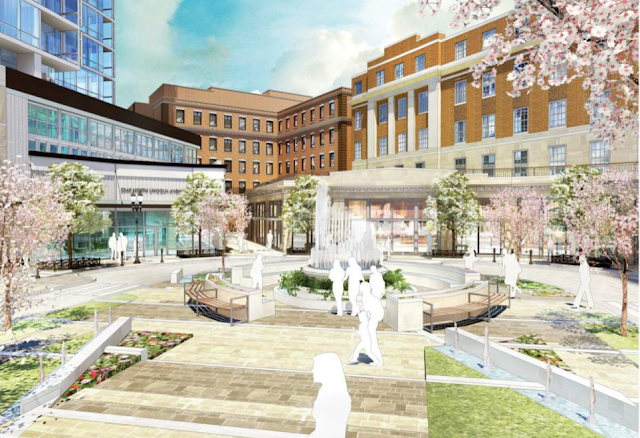 But it's not quite as charming with motor vehicles added in. 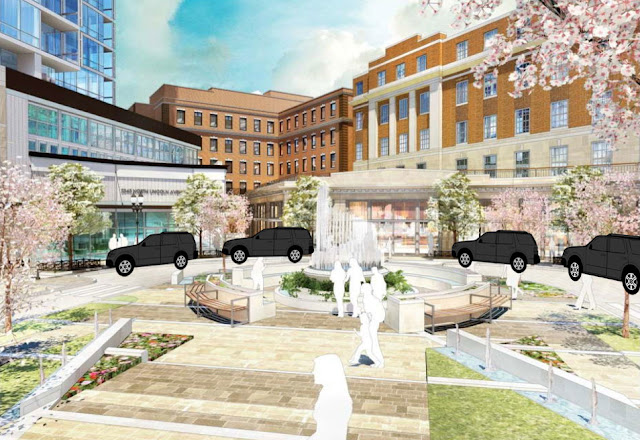 And those are just parked vehicles. You should also imagine a second row of vehicles looping through the circular area surfing for a spot, and then stopping and idling as they wait for someone to exit the building, or for another driver to vacate a parking spot. Picture the noise and fumes of these vehicles, just a few yards from the benches where people are supposed to be sitting and relaxing. And this is on three sides of the "plaza", with busy Lincoln Avenue serving as the fourth side.

It adds up to a public space that will be sadly underutilized. This will never be a place like Giddings Plaza, where young mothers plan ahead to meet to chat while allowing their children to play. Sure, someone who works in one of the shops might sit on the bench on their break to smoke a cigarette while checking their Twitter feed, but otherwise, this won't be a place to stay, only to pass through.

So is this an "open space"? Technically, it is.

Is it an "active, useable space"? It will be very active, with vehicular activity. When you design for cars and SUVs, you will attract cars and SUVs. They will fill every space given to them.

Will this be identifiable as the "center of Lincoln Park"? Unfortunately, no.
Posted by Bike Walk Lincoln Park at 10:26 PM