There was a great turnout of nearly 25 people the North Side Community Advisory Group meeting at Gill Park on December 17. The assignment of the day was to provide information on existing conditions for bicycling on the north side to the CDOT team who will put together Chicago’s new Streets For Cycling Plan 2020. We were asked to map and list specific destinations, barriers and assets.
There were eight community area maps for each of Lincoln Park, Lake View, North Center, Lincoln Square, Edgewater, Uptown, West Ridge and Rogers Park. Each one resulted in a map and a few pages of input. We’ve provided pictures of a few of the maps as examples.

The full results are too long to post, so we’ll just giving you a taste. (If you’re not already on the e-mail distribution list for the North Side Streets for Cycling Community Advisory Group, please e-mail Michelle@KairiesStenzel.com to join and receive notices of the future meetings to be held in January and February!)
For destinations, the question posed was “Where do people in the neighborhood need to go?” In addition to all the CTA and Metra train stations within the neighborhoods, some of the other destinations included:

Point barriers were defined as specific locations like hazardous intersections or narrow underpasses that limit access for bicyclists. This was a popular entry, and the submissions included: 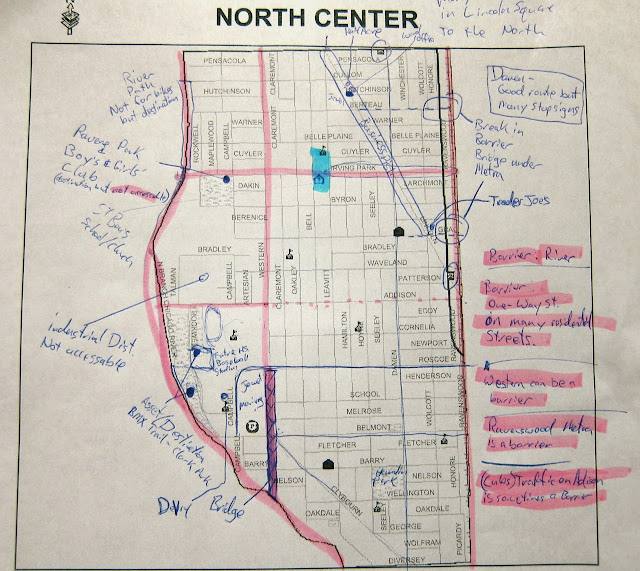 Line barriers are barriers such as rivers, expressways, wide arterials with high traffic speeds, which limit access or create hazardous conditions for bicycles. Some of the line barriers identified were:


Finally, we were asked to list the assets to bicycling on the north side, and we recognize there are many, especially compared to other parts of the city, where there are even more wide arterial streets, higher speeds of car traffic, and higher crime rates. The lake front trail was most commonly listed as an asset (and a destination). Many groups listed the existing bike lanes on Lincoln, Halsted, Armitage, Damen, Pratt and Morse as positive factors in their areas. And many provided information about quiet and safe streets that they already use for bicycling, like Leland, Glenwood, Greenview, and Winnemac. And that leads to the next topic that will be addresssed, which is bike boulevards and short neighborhood connectors. We hope you join us.
Posted by Bike Walk Lincoln Park at 7:00 AM