"Neighborhood greenways" and other news

Today will be a round up of news and reminders.

First, it was recently announced that the bikeways formerly called “bike boulevards” will be called “neighborhood greenways” in Chicago. Hopefully by now you’re familiar with the features of these bikeways, perhaps from our prior post on the subject, which we have edited to make note of the name change. These are side streets that are given design features that calm motorized traffic.


The name is being used already in Portland and Seattle, which are a few steps ahead of Chicago in implementing them. The name change make a lot of sense because even though the result of fewer and slower-moving cars makes the street welcoming to bicyclists, the benefits go beyond that, in that the street becomes quieter and much more walkable for pedestrians, and much more livable for residents along the street.

Although other cities are ahead of us, Chicago has taken the first step in the right direction in that it was recently revealed that a stretch of Berteau Avenue in the North Center neighborhood will be our city’s first neighborhood greenway. (The information was shared at last week’s Streets for Cycling Plan 2020 meeting at Garfield Park Conservatory -- you can read full coverage of that event on Grid Chicago.) Berteau is a quiet side street with low traffic volumes, and it will provide a nice east-west route. The stretch will likely only be about one mile long, but it’s a start. Congratulations to the people in North Center for scoring Chicago's first neighborhood greenway!

Get involved in the north side planning process!

The Streets for Cycling neighborhood outreach continues. The leaders of the North Side S4C Community Area Group are working to put together a fun and easy way for you to provide your suggestions and opinions about where neighborhood greenways should be installed elsewhere on the north side. If you’re already on the North Side Streets for Cycling Community Area Group e-mail list, just keep your eyes out for further news on this. If you’re not yet on the e-mail list -- why not?!? -- just drop a line to me to be added: Michelle at KairiesStenzel dot com. Everyone is welcomed.

The CDOT team and their slides and maps will be on the north side on Wednesday, February 1 at the Sulzer Library at Lincoln and Montrose, starting at 6:00 pm. Mark your calendars now and plan to attend with us! This is another opportunity for you to hear directly from the CDOT leaders who are directly involved in the process, and to give your input and opinions.

If there’s one thing that has been made clear so far, it’s that community input is not only welcomed, it’s needed. Chicago is an enormous city with 77 formally defined community areas, and about 4,000 miles of streets. The experts on where improvements are needed all over the city are the ordinary people out there living in those neighborhoods, and who are walking and riding those streets every day. So make sure you come out to make your voice heard. We’ll be there! 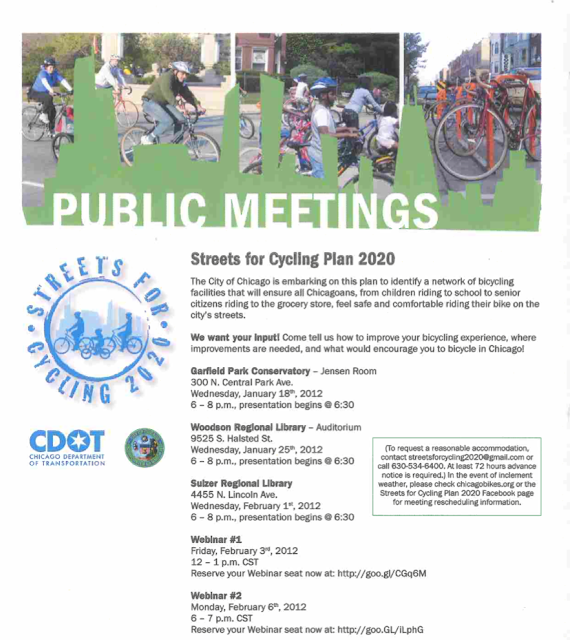