It's been nearly a year since we first posted on the section of Clark Street from North Avenue to Armitage, which has four lanes of fast-moving car traffic, no bike lanes, and little help for pedestrians trying to cross it. I spent a little time recently in the area during the Green City Market morning hours, to see if there are any new developments.

The good news is that more people than ever are doing the "green" thing and riding their bikes to the market. There were bikes locked up to every street pole and fence. 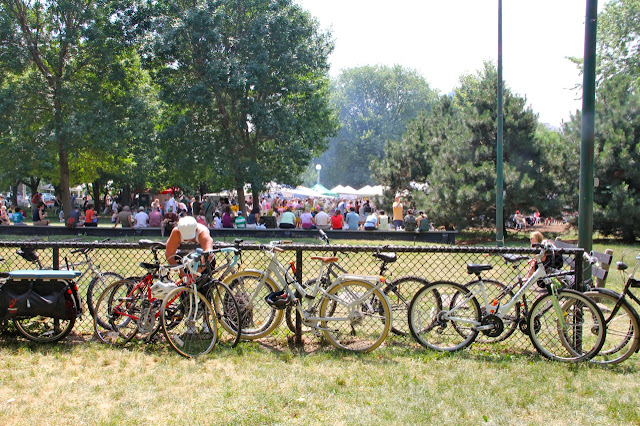 This also makes it very clear that we need more parking for bicycles during on Green City Market days!  Locking to a chain link fence is not ideal, since the fence links can be very easily snipped with wire cutters. Since the Green City Market has a "special events" permit, perhaps they can arrange to have bike racks placed just for the May to October market season? 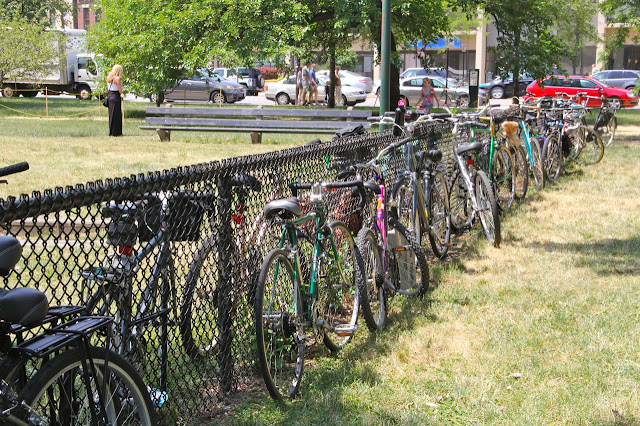 Post continues after the jump --->
(cont'd)
I checked out the current situation for people crossing Clark at Wisconsin, where there's a marked crosswalk, but no stop sign or stop light. By law, motor vehicle drivers are supposed to stop for people in the crosswalk (yes, even when there's no stop light or stop sign!), but it's very rare that they do. 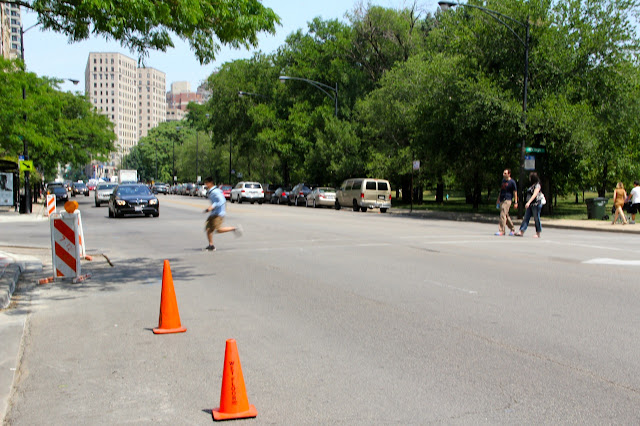 In just five minutes of standing and observing this intersection, I saw many people running across to get to the other side, since car drivers showed no signs of slowing or stopping. 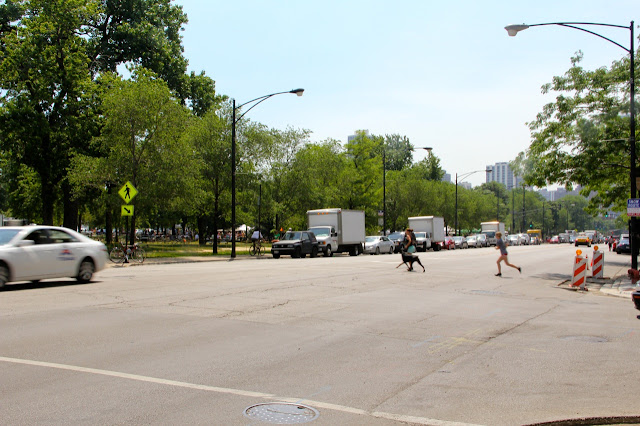 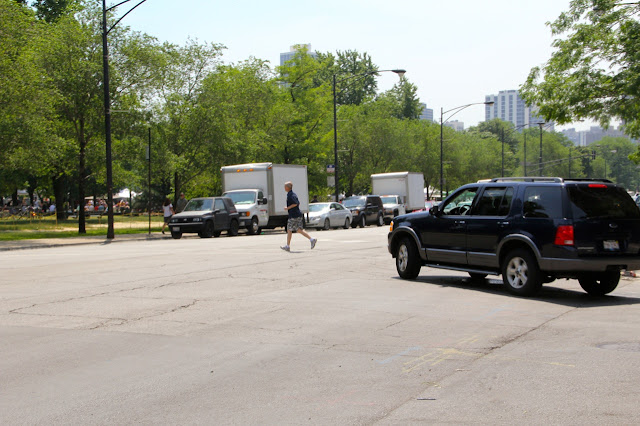 There's still nothing at all for bicyclists on this section of Clark Street. They have to carve out whatever space they can. 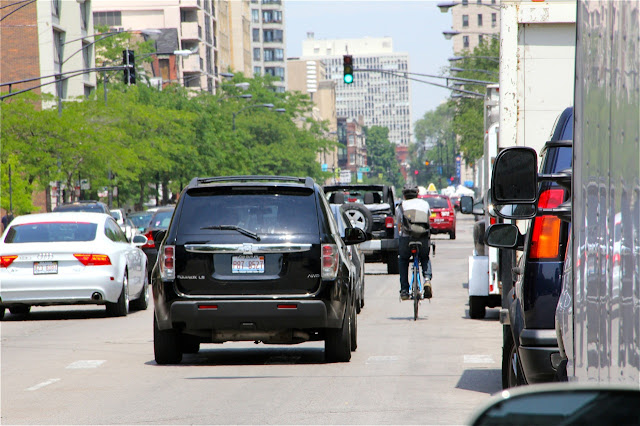 People on bikes naturally stick close to the parked vehicles to increase the "shy distance" from the moving motorized traffic to their left, but this puts them in the door zone, where they can be knocked into traffic if someone opens their car door. 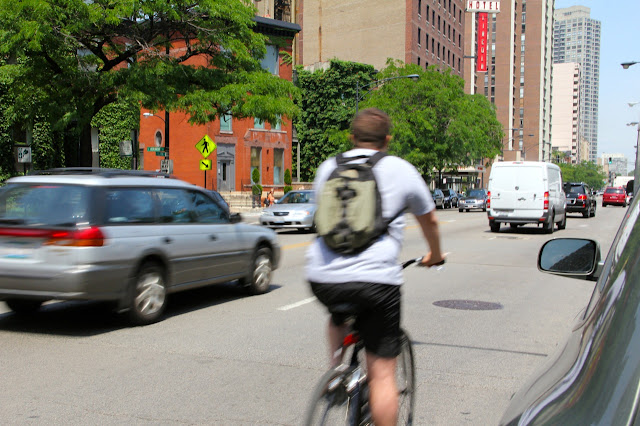 Some people are brave enough to take the entire lane. You shouldn't have to be brave to ride a bicycle alongside Lincoln Park, right next to the farmer's market. 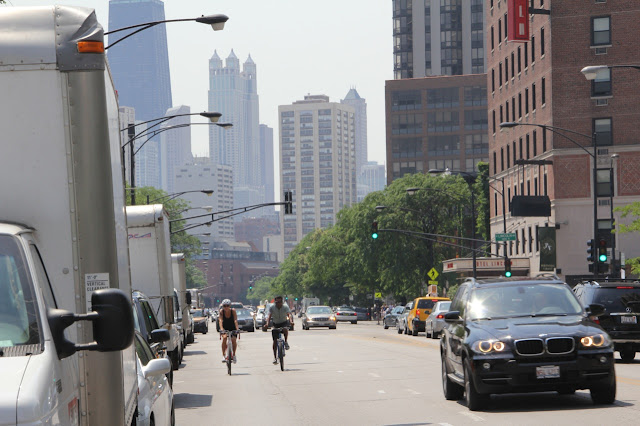 I went over to Stockton Drive to check out the crosswalk leading from the Green City Market area to the Lincoln Park Zoo Nature Boardwalk area. Since last summer, the crosswalk stripes were repainted, so they are brighter. Because motorized traffic on Stockton was moving so slowly anyway, many drivers stopped for pedestrians on the crosswalk. 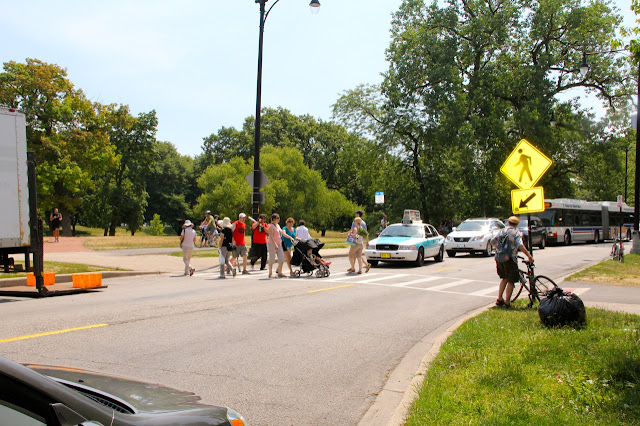 However, I noticed that the drivers often stopped right before the crosswalk with inches to spare, and then began rolling forward at the earliest possible second. 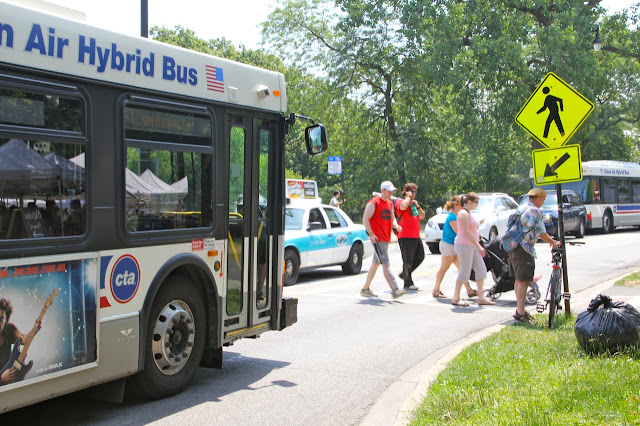 And there were still plenty of drivers who felt no compunction about zooming through, right in front of a person in the middle of the crosswalk. 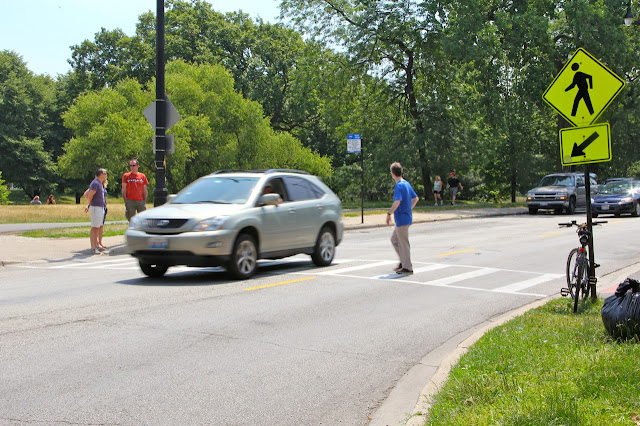 Finally, back on Clark Street, there's the unsignalized crosswalk at Menomonee Street. We likened it to a game of Frogger in this post last year (and it's the same thing at the Wisconsin Street crosswalk).

Well, it's still pretty much the same situation now: six lanes wide,  faded crosswalk, speeding cars and people waiting and waiting to cross before finally galloping over to avoid being run down. 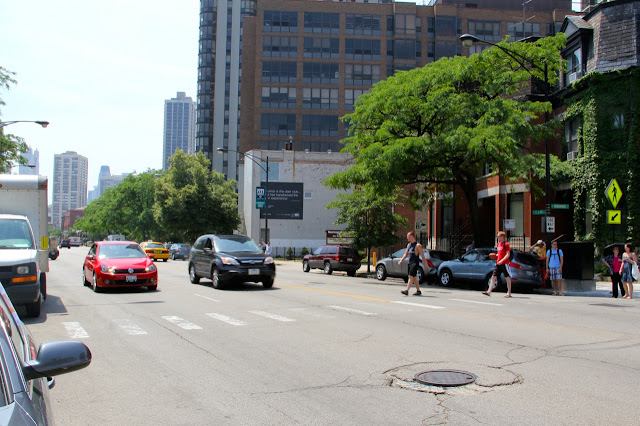 It doesn't help visibility for either pedestrians or drivers when the big market trucks are parked inches away from the crosswalk. 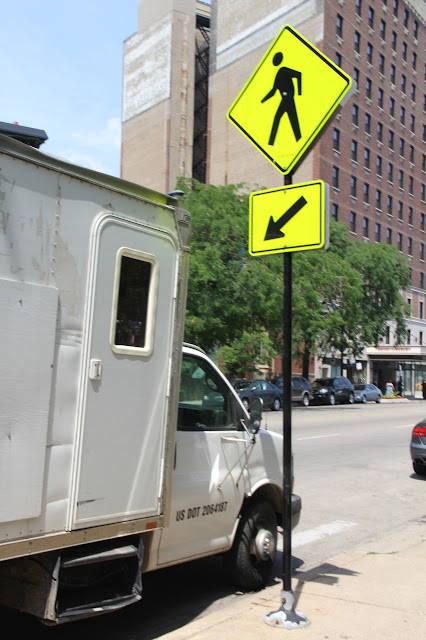 This couple crossed slowly and bravely, while the man gestured pointedly at the crosswalk to signal the oncoming drivers that they should be stopping. We shouldn't have to be brave to cross the street to get to the farmer's market. 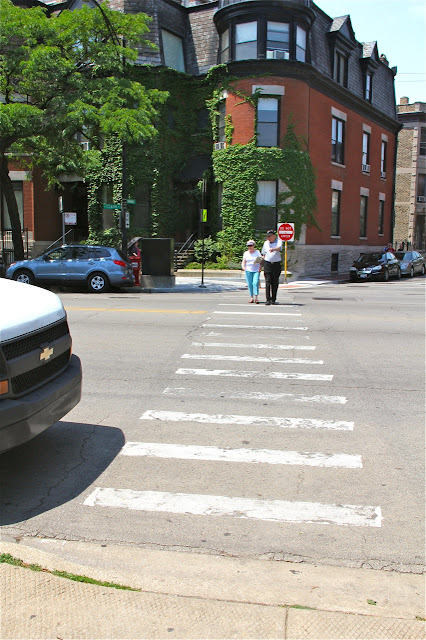 Once again, there were times when drivers did stop for people crossing, but they resumed their flight down Clark Street as soon as they could. 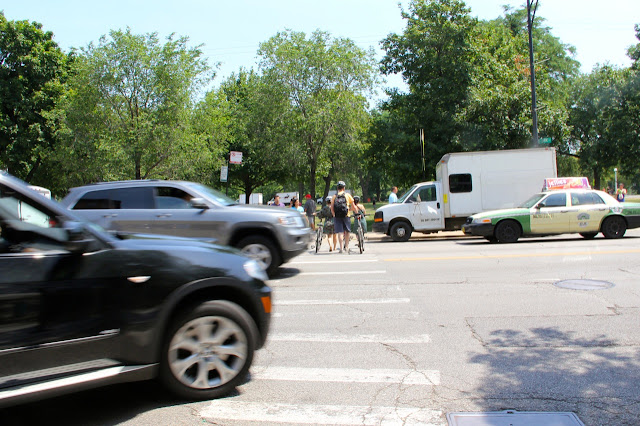 You may recall that we've been advocating to make this section of Clark Street more livable and human scale through a redesign that includes the installation of protected bike lanes and pedestrian islands. Here's our own rendering of Bike Walk Lincoln Park's vision of what it might look like:
Not much has changed yet on Clark Street, but there are changes a-coming. Alderman Michele Smith included funding for a pedestrian island at the Menomonee Street crossing in her aldermanic menu requests for the next year (PDF).

Also, on the city's Streets for Cycling 2020 draft plan (PDF), the entire length of Clark Street will be one of six  streets citywide to get the highest level of bicycling facilities possible, starting with protected lanes, if the street width allows for it. This section of the Clark Street certainly has enough width!
So we're fairly certain safe bike lanes are coming, it's just a question of when. "Not soon enough!" is the answer I'm sure a lot of people in these photos would give.
__________________________________________________________
Follow us on Twitter @BikeWalkLP ! We promise not to overtweet.