New buffered bike lanes have been installed on Clybourn Avenue. I rode the new lanes from North Avenue to Belmont to check out how they look, and how they "feel" to a bicyclist. 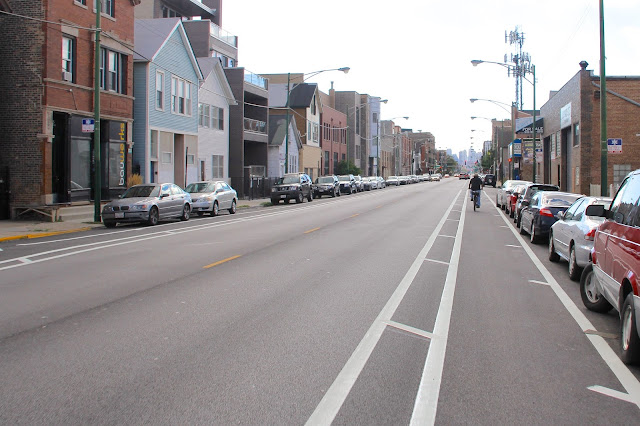 My quick takes: These buffered lanes are definitely a big improvement over what we had before, which was nothing. For experienced bicyclists, they are a nice upgrade. However, due to factors preventing the installation of ideal bike facilities, they contain many stretches with little or no help for bicyclists. Those "weak link" sections will be challenging for cautious riders, and they won't help us to attract many people to give bicycling in Chicago a try.

I'll show you what I mean with pictures, but first, a little background.

Clybourn is a southeast/northwest diagonal street that starts at Division and ends at Belmont. I wrote about how it has a lot of potential to be charming and economically productive in this prior post in June 2012. It's designated as a Crosstown Bike Route in the Streets for Cycling 2020 Plan, which means that our city planners would like to install the highest level of protection for bicyclists on it whenever possible. It's wide enough in many places for protected bike lanes; however, there are two factors that are hampering this plan.

First is that Clybourn is under the jurisdiction of the Illinois Department of Transportation, and IDOT has banned the installation of protected bike lanes until the agency conducts further studies (read more on that via this Streetsblog Chicago post). Therefore, even though the Chicago DOT would like to install protected bike lanes on as much as Clybourn as possible, that's currently not allowed.

The second factor hampering the plan that will continue to hamstring us for the next 70+ years is the parking meter lease deal that Chicago entered into (my prior post here), which doesn't allow us to redesign our city's streets unless accommodations are made to the investors in Chicago Parking Meters LLC. Keep both these issues in mind as we travel up Clybourn.

The picture below is on Clybourn somewhere between Division and North Avenue. This section is also scheduled to be upgraded but hadn't yet been when I rode them two weeks ago. This view gives you an idea of what the raw material of Clybourn is like: Very wide, with moderate to light car traffic. 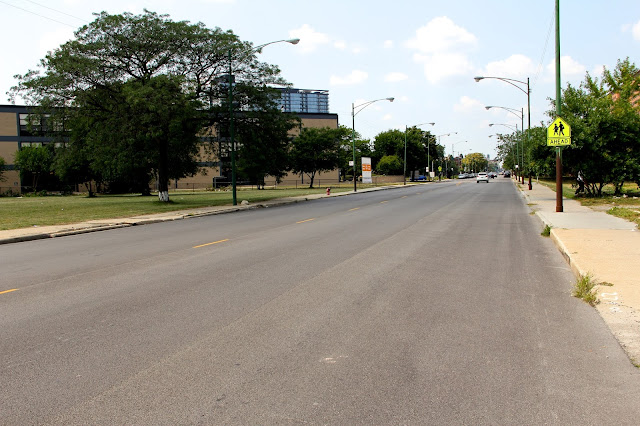 So my review of the new buffered lane on Clybourn begins north of the intersections with Halsted and North Avenue. It's a nice comfortably wide bike lane, with an additional buffer on the outside of the lane. There are long stretches like this on much of Clybourn now, and this is a very welcome change from the blank asphalt that was there before. 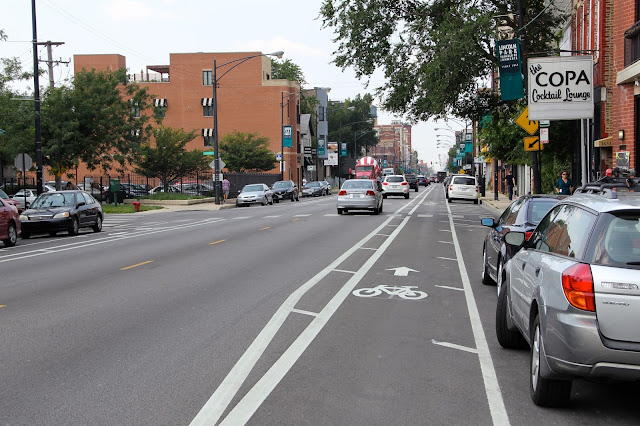 My biggest issue on Clybourn is the intersections. At every junction, the buffered lane ends, and then there are just "shared lane" markings that tell bicyclists to mix it up with motor vehicles.

It looks to me like this sharing "must" be done because an additional turn lane is added for motor vehicles, and that turn lane takes up width. Below is the shared lane marking on Clybourn just north of Willow, with a turn lane added on the southbound side of the street. Notice also how far it is before the buffered lane begins again! 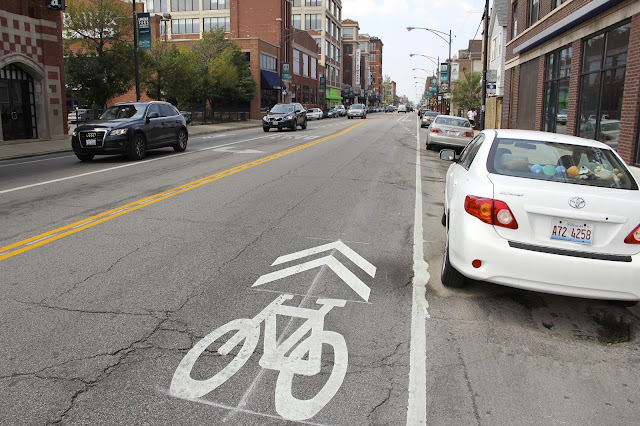 Finally, the buffered lane appears again!  But not for long... 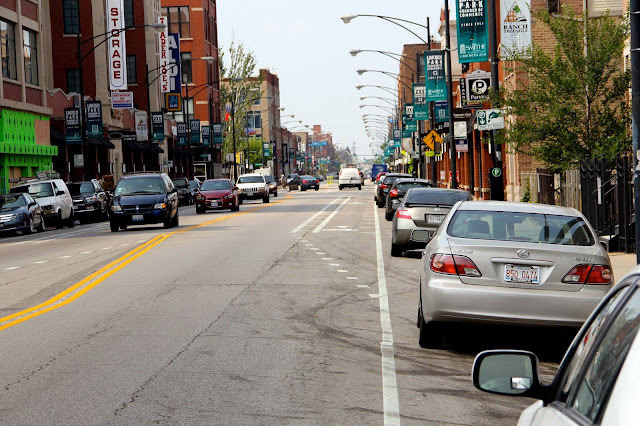 Why does the buffered lane end and another sharrow appear before the next intersection? Because there is a l-o-n-g turn lane for cars turning left onto tiny little Wisconsin Street! This turn lane can probably hold 6 or 8 motor vehicles. 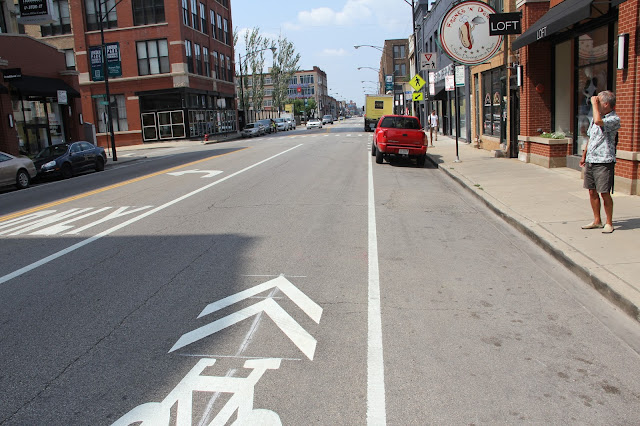 Now, I understand the need for a long-ish turn lane onto major streets like North Avenue or Diversey, but Wisconsin? That street only goes two blocks further west of Clybourn before ending. I'll bet no more than 200 cars a day use that turn lane, and half the time, they have to wait for 0 seconds before turning because there's no oncoming traffic. Even if large trucks need to be accommodated, it doesn't seem that a lane quite that long is necessary Hopefully, when Clybourn can be more completely redesigned, these turn lanes will be "right sized" to match actual traffic patterns, and more space can be allocated to bike lanes.


It's especially discouraging to see long rows of curbside space reserved for "metered parking" that has very few or no cars, as seen in the picture below. The entire block is metered and could probably fit 15 cars, but only one was parked there (on a Wednesday afternoon). 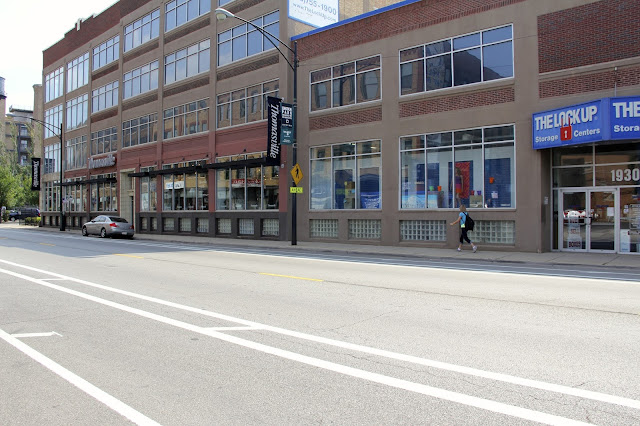 The sight of empty parking lanes is disheartening because under the constraints of the parking meter lease deal, if in the future we'd like to add protected bike lanes to blocks like this (and there are many similar blocks on Clybourn), our city planners will have to identify an equal number of new "spots" nearby that are acceptable for relocation to the Chicago Parking Meter LLC people. This public property on Clybourn that CPM LLC "owns" is not used for parking much currently, not generating much revenue, and could be easily repurposed into a comfortable bike lane, if we didn't have the lease in place.

Onward! After a nice long stretch of buffered lanes, there are sharrows again at the intersection with Cortland, where Racine begins. 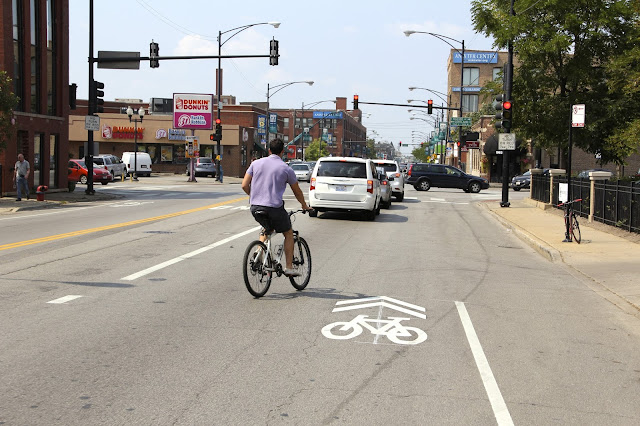 This is what a rider can expect to deal with in the shared lane portions of Clybourn. This will not be relaxing for people who are new to riding bikes in the city. 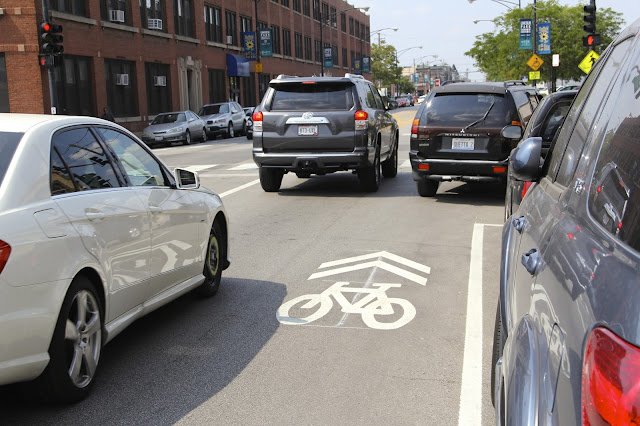 The picture below shows the stretch north of Wayne Street, which again has a nice comfortable buffered lane. Take a wild guess which side of the street is metered parking, and which side is unmetered, unzoned parking? It should come as no surprise that drivers don't choose to pay for parking when there are mini-malls with giant parking lots on both sides of the street here (on the right side, the lot is hidden behind a row of storefronts). 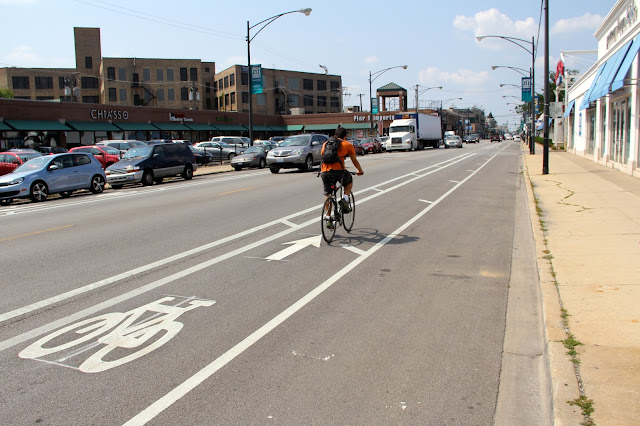 As you approach the intersection with Southport, the buffered lane ends again, because of a long turn lane onto Southport. 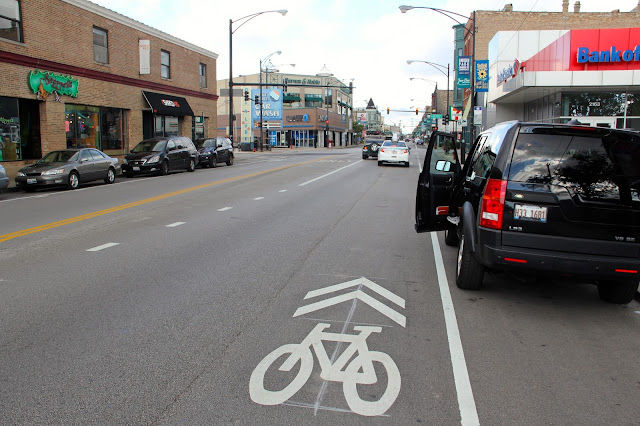 Below is a view of Clybourn looking south at the Southport intersection. Again, there "isn't room" for anything but a shared lane here due to the presence of a turn lane from southbound Clybourn onto northbound Southport. It's about 5 car lengths long, even though very few drivers use the lane, given that they're effectively making a U-turn with that maneuver. This must have seemed like a good idea in 1955, though, or whenever they first designed the street. 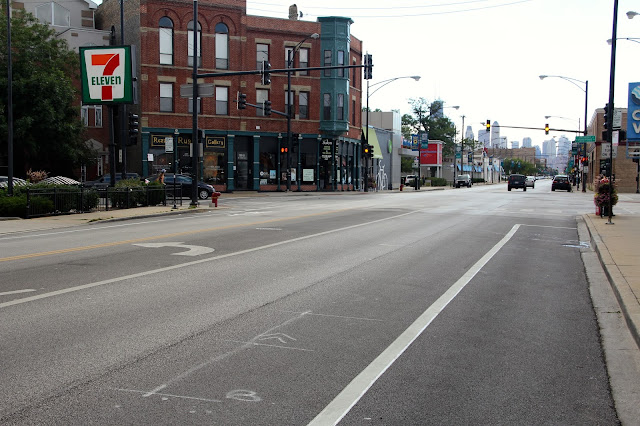 We're continuing north of Webster now. The first block or two of Clybourn here have a great mix of shops and services. Notice how long it takes for the buffered lane to begin again. 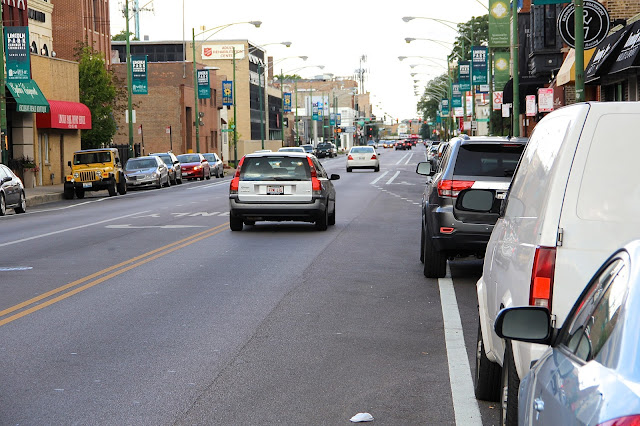 This is a bicyclists' view of the intersection with Ashland, and then just beyond that, the crossing over Fullerton. On the new protected lanes on Dearborn, Kinzie, Elston, and Milwaukee, the markings for the bike lanes continue through the intersections, which help keep bicyclists visible and alert drivers to expect their presence. Those markings are not yet in place on Clybourn. 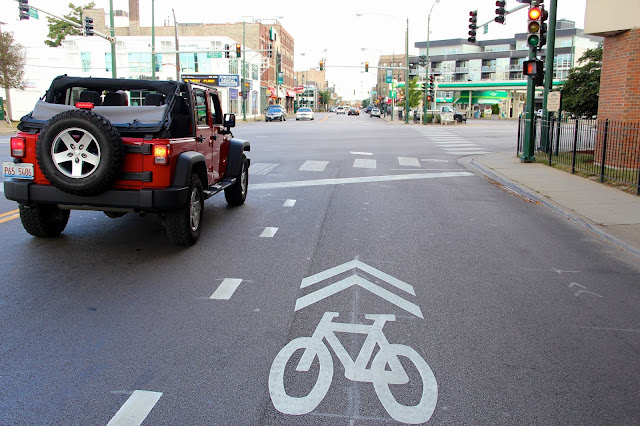 Past the Fullerton intersection now: 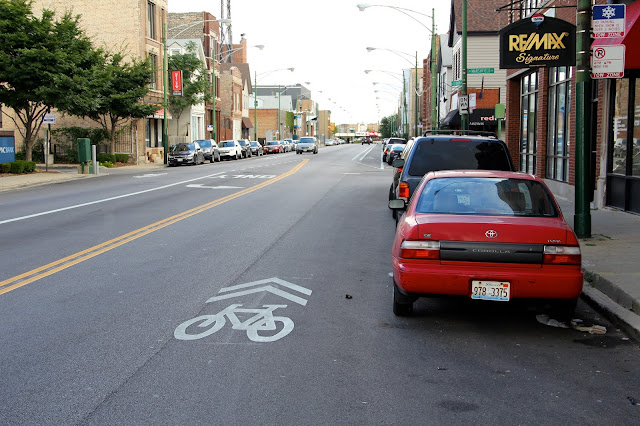 After the viaduct under the Metra tracks, we enter "big box" country, land of Dominick's and Aldi and Menard's. The buffered lane is against the curb here. Again, the clear markings and symbols that designate a space for bicyclists is a great upgrade for people who used to ride the street with nothing at all. (Plus, a buffered bike lane next to a drive-through Taco Bell: there can't be many of these in the entire country.) 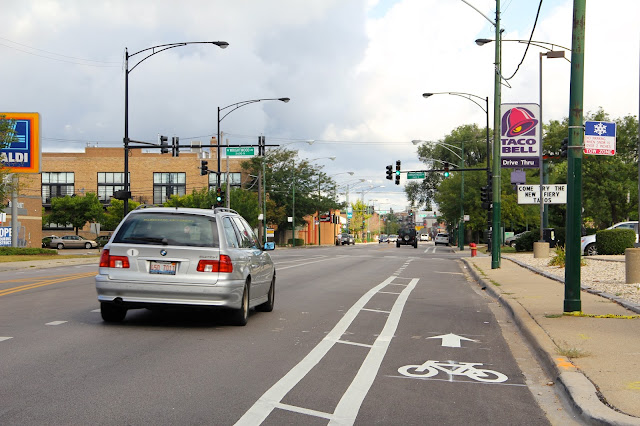 Continuing north through big-box country, now by the Costco south of Diversey. The "parking lane" on the right runs alongside vintage light industry buildings and is unmetered, unzoned, unused. 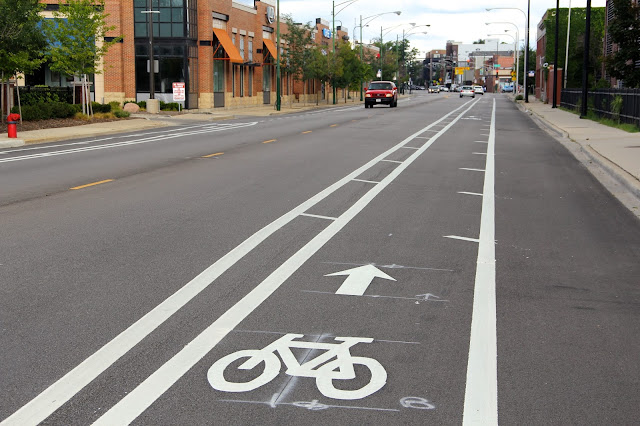 Approaching the Damen/Diversey six-way intersection here. I don't think new riders will love the feeling of being buzzed by news vansin the shared lanes; I've been riding in Chicago 17 years and somehow still don't relish the experience. 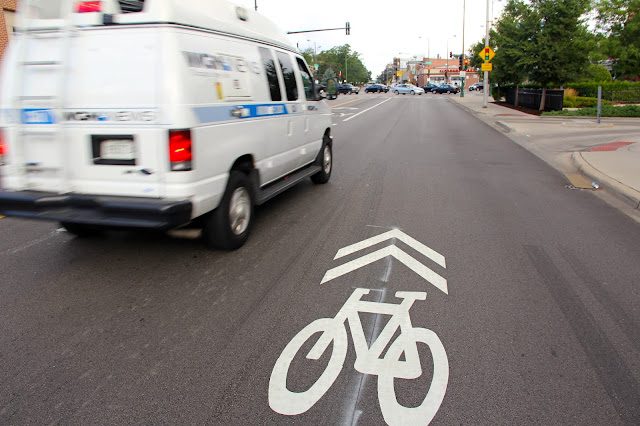 The picture below is the crossing of Diversey, where we leave Lincoln Park and enter Lakeview. 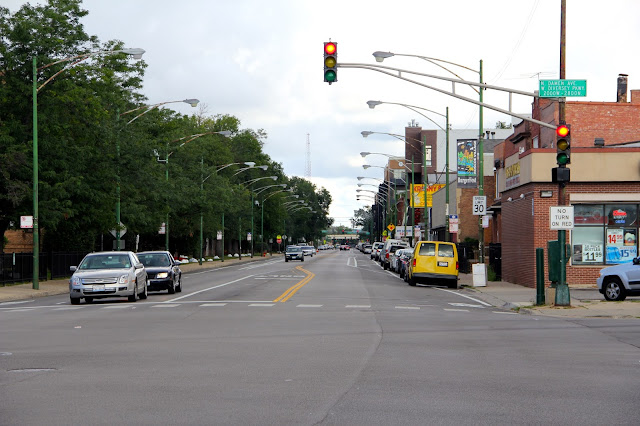 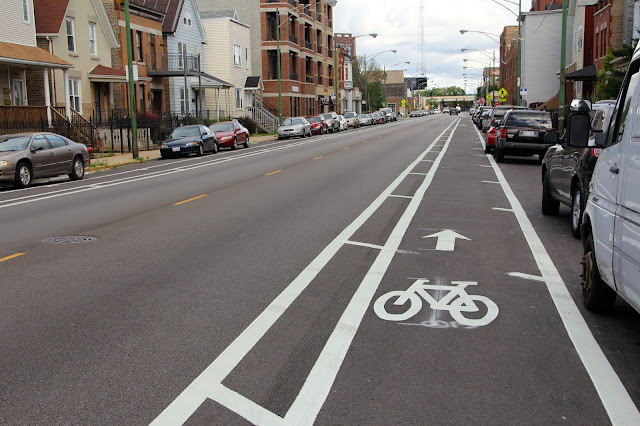 The calmness of the buffered lane and relatively light motor vehicle traffic allowed me to look around at the shops and restaurants lining Clybourn. There are many car washes, auto repair shops and the like still present from earlier years when the street was more industrial, but there are also newer bike shops, pet services, pediatrician offices, preschools and cafes operating as well. Clybourn continues to have huge potential! I never knew there was a 90 Miles Cuban Cafe on Clybourn at Oakley, and made a mental note that this would be a great destination for a leisurely ride on another day. 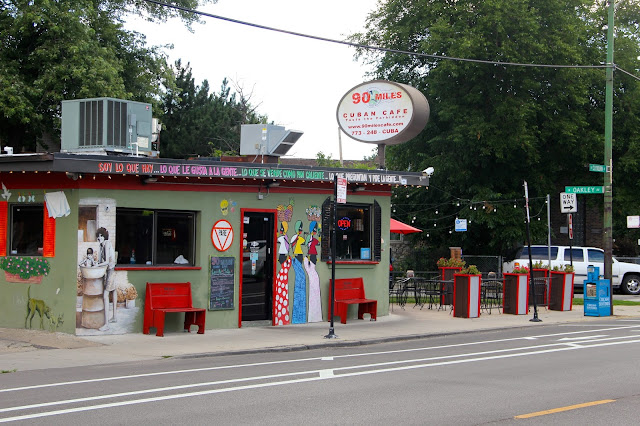 Finally, we're approaching the intersection with Belmont and Western, where Clybourn ends. This complicated intersection still has a "flyover" for motor vehicle traffic on Western as well as the five-way surface intersection underneath. Approaching on Clybourn, the buffered bike lane becomes a floating lane between right-turning and left-turning motorized traffic. I guess right-turning bicyclists are supposed to use the right turn lane with cars. The floating lane has an arrow telling bicyclists to turn left onto Belmont, so I thought I'd give that a go. 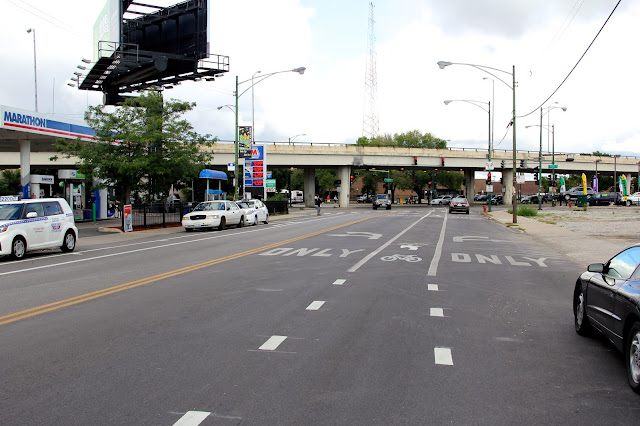 Oh, cool! The floating lane is actually marked through the huge intersection! It must lead to a biking nirvana on Belmont! 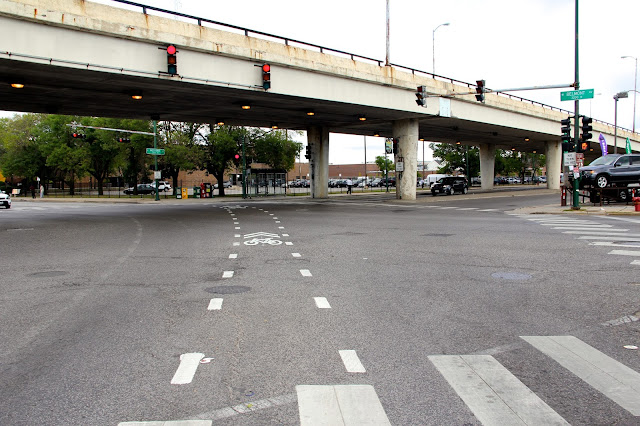 Um, no, it doesn't. Here's Belmont after the turn: Nothing marked for bikes at all. Yet. Someday. Sigh. 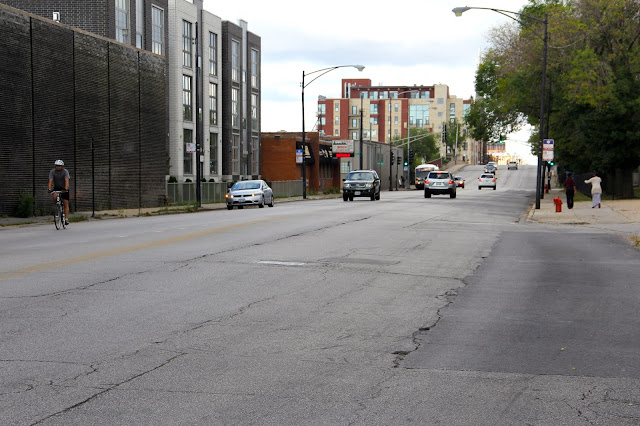 So again, I appreciate the effort made by the city into putting something into place on Clybourn while IDOT decides whether protected bike lanes offer protection for bicyclists. Even when IDOT lifts its ban, the parking lease deal will continue to make things challenging for upgraded lanes, but I think with creativity and hard work, they'll be able to add a mix of protected and buffered lanes on Clybourn just like they've already done on Milwaukee (see the Streetsblog Chicago post on that project).

And to end on some positive notes: I think Clybourn is now a very good diagonal alternative. I think it's better than Elston because there's more retail, and the corridor is less industrial and desolate-feeling as Elston. It's better than Lincoln, which is so very narrow and very busy with motor vehicles and turnover, so there's much higher chance of being doored, or having the lanes blocked by double-parked motor vehicles.

I noticed small but positive developments on Clybourn, like the lush planters lining the edge of the parking lot for Barnes & Noble and the Regal Webster Place movie theaters. We know we're making progress when store owners realize that surface parking lots are not esthetically optimal and need softened edges. 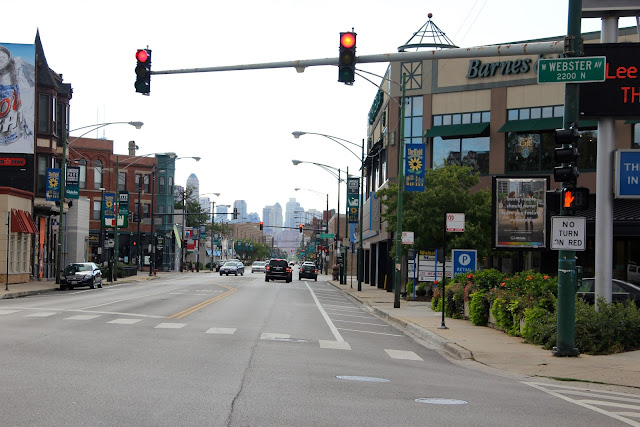 There are also a few newish in-road Stop for Pedestrian signs on Clybourn now, like these near Jayson Home. These are sorely needed and surely much appreciated by people, like this young family crossing Clybourn on foot. 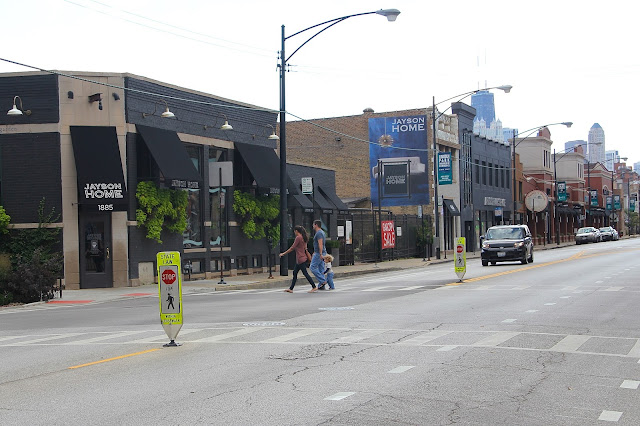 The thing I liked seeing most on the new Clybourn lanes was the small-but-steady stream of bicyclists, pedalling along quietly to their destinations. 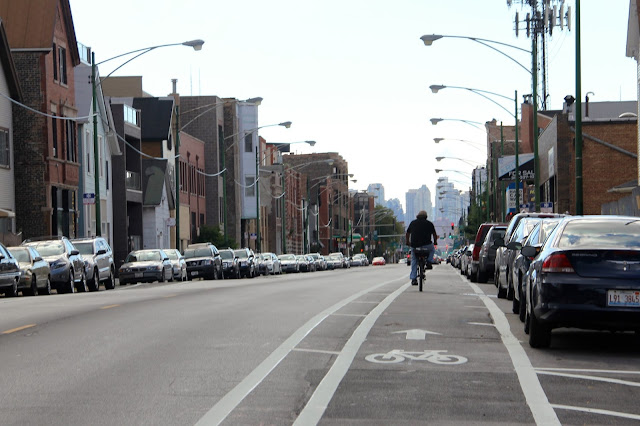 Have you ridden the buffered lanes on Clybourn yet? What do you think?