Clark and Fullerton: Busy, crowded, and in need of TLC


On a recent cold and overcast Saturday morning, Michael, Andrew, John and I converged at the intersection of Clark and Fullerton to observe, document and make recommendations for improvements. We evaluated that intersection as well as nearby Fullerton and Lakeview. Although our focus was on making the intersections better for pedestrians, in the spirit of applying a "Complete Streets" philosophy, we kept in mind all all users, including bicyclists, transit riders, and drivers.


We began with noting that this is a very busy intersection for all modes of transport. The housing stock is dense, with many high rise condos close by along both streets. To the north and south on Clark, there are dozens of commercial establishments. Two well-used bus lines, the 22 Clark and 36 Broadway, go through the intersection on Clark. (There is no Fullerton bus line here because the service ends at Halsted.) Clark Street is also a very popular bicycling route, and is in fact a designated Spoke Route on the Streets for Cycling 2020 Plan. Fullerton is a main access route to get to DePaul university and other points to the west, as well as the Lincoln Park Zoo, the Lakefront Trail and other points to the east.

All of this "busyness" is a positive for the intersection: We noticed that all users seemed to be aware that this is a place where it's necessary to be alert and careful. Vehicle speeds did not seem to be excessive, and this may be partly due to the presence of the red light cameras here, but the sheer number of vehicles and people in the space itself keeps speeds down, and that's good.
Much more ---->


The crosswalks already have countdown timers to advise people how many seconds left until they should be finished traversing the roadway. The amount of time given to cross the street seemed reasonable. Specifically, we measured that Clark Street is 55' 3" across, and pedestrians are given 26 seconds total to cross. This means that they only need to cover 2 1/8 feet per second. I looked up the current standards, and it's recommended that people should not be expected to cover more than 3 1/2 feet per second, so the current timing allows for an even slower gait. (If you want to get deep into the weeds on this topic, browse around on this Federal Highway Administration guide.) The timing to cross Fullerton was 29 seconds, and Fullerton is slightly narrower, so again, these don't need adjusting.

It was good to see that motor vehicle drivers are already restricted in movement. There are signs posted stating that no turns on red allowed at any time. This keeps drivers from inching up to the corner to try to look at traffic coming from the left in order to turn on red, and thereby blocking the crosswalk for pedestrians. Also, drivers are not allowed to make left turns off of Fullerton onto Clark. This eliminates left-turn conflicts for people crossing Clark Street.


SO WHAT NEEDS HELP?

The crosswalks themselves were made into stamped brick patterns at some time in the last few years. This is when asphalt is stamped into a decorative brick pattern, painted a maroon red, and then two white lines are added on either side to further increase visibility. These are quite nice when they're first installed. (You can see pictures of what they look like new when they were installed at North and Wells in 2011.) However, the problem is that without regular maintenance, they end up looking like they do currently at this intersection.

As you see, the red paint is so faded as to be barely distinguishable from the regular asphalt next to it. An intersection like this with heavy buses passing every few minutes and 10,000+ cars and SUVs per day means that the stamped pattern also wears away to nothing in spots. Even the white lines are worn away in large patches. Overall, this leads to an intersection that looks like it has barely any crosswalks marked on it.

So, our first recommendation is to either 1/ restamp the asphalt, repaint, re-mark, and commit to maintaining the crosswalk regularly each year or 2/ install the newly standard "international" or "ladder" style crosswalk over the existing stamping. We assume that repainting stop bars is always a part of that project, but perhaps we shouldn't assume, so: Also repaint the stop bars for motor vehicles where needed.

Our second recommendation is to add Leading Pedestrian Intervals. The volume of people crossing each leg at each cycle is high, and giving them a few seconds lead time to enter the intersection ahead of the turning motor vehicles increases their visibility and their safety. (Since drivers are not allowed to turn onto Clark, perhaps LPIs are not needed for pedestrians crossing Clark.)


Speaking of turning vehicles, another big negative we noticed was the conflict between drivers turning left from Clark onto eastbound Fullerton. There is no dedicated left turn signal for those drivers, and there are many of them, presumably headed to Lake Shore Drive. On green, they wait for the last of the northbound Clark vehicles to clear, and then they begin to make their left turn onto Fullerton, regardless of the presence of pedestrians on the crosswalk or not. As you see from the picture above, this leads to a lot of instances of motorists cutting off pedestrians in front of them, or turning very closely behind them, or sometimes both. This makes for an uncomfortable and frankly, sometimes dangerous crossing for pedestrians. Therefore, although we recognize that this change would affect the signal timing of all other users, we recommend that the intersection be evaluated for the possible addition of a left turn arrow from Clark.

We noticed that at the southwest corner on Clark, parking is allowed all the way to the edge of the crosswalk. On the morning we were there, that spot was actually empty, but I've been there other days in which it was not, as reflected in the picture below. I don't believe this was intended to be allowed, but instead that a sign fell off and was never replaced.
This configuration is not good for visibility of pedestrians, and it makes the intersection very tight for bicyclists, bus operators, and motor vehicle drivers who have passed through the intersection and are continuing south on Clark. Therefore, we recommend that signage be re-hung to create a defined parking-free area on Clark near the crosswalk at the southwest corner.

Our last observation is again something we brought up during the Armitage and Halsted evaluation, and that is the extremely narrow sidewalks on the south side of the intersection. It's obvious that at some time in the last few decades, Clark Street was widened in order to create more lanes for motor vehicles, and this was done by making the sidewalk narrower. And then there are traffic signal poles, eye-level signs, garbage cans, newspaper kiosks and other "stuff" that is also placed on the sidewalk, making an already narrow space even narrower.

In front of Five Guys, in the picture below to the right, the sidewalk is 6'10" wide, but from the sharp edge of the Five Guys building to the traffic signal pole, it's only 3'5", or 41 inches. This is at a place where there are people walking north, walking south, hailing cabs (and annoyingly on this day, cheery people blocking space while MEASURING things?!).﻿ 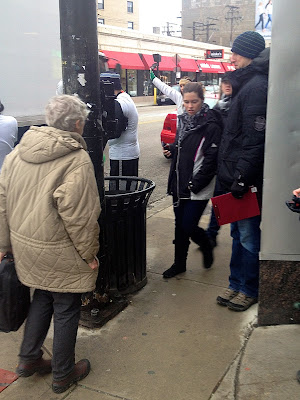 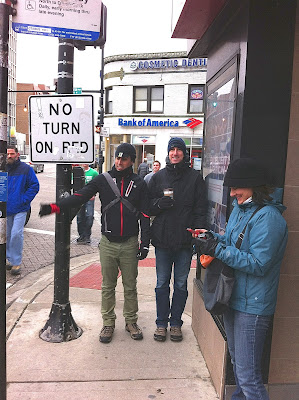 This does not make for an optimal pedestrian experience. There's no room for greenery, a bus shelter, benches, cafe tables, or just space to walk without having to negotiate through hordes of oncoming people like a linebacker.

You may think this doesn't matter, but it does. Consciously or not, people notice this and reach conclusions about how nice an area is for walking, shopping and living. This commercial corridor is doing all right, largely due to its existing housing stock and proximity to downtown and the lakefront amenities, but it could be so much better.

To give you a visual comparison, here is John demonstrating the width of the Clark sidewalk, which is 6 feet down this stretch, where it's not even blocked with any "stuff" but still just wide enough for two people to walk on:
And here's a picture I took a few weeks ago on Southport Street just off the Southport Brown Line stop:

Notice the difference? There's room on the Southport sidewalk for signage and garbage cans, but also for planters, benches, decorative awnings, and plenty of room for people to walk, relax, and breathe. It makes a huge difference, and this charming corridor is absolutely buzzing with visitors and residents at all times. We won't be getting sidewalks like this at Clark and Fullerton any time soon, but just keep this image in mind going forward when you hear us talk about the importance of the sidewalk as public space in our neighborhood.

We then moved one block east to look at Fullerton and Lakeview Avenue! This is a T-intersection surrounded by vintage and modern highrises on two sides, and a Lincoln Park grassy area on the northeast side. Even though it's only one block from Clark, it has a much calmer feel, due to the lower number of motor vehicles on Lakeview, and the less complicated intersection configuration. Nevertheless, this is a busy and important crossing for people walking dogs, walking to bus lines on Stockton, or heading toward the Lake Front Trail for a run. (Since the sidewalk on the south side of Fullerton was removed last year at Cannon to create a fifth lane for motorized vehicles, the northern sidewalk along Fullrton is more important than ever as an access route to the lake.)

Each of the three legs of the intersection has a marked crosswalk with a countdown timer already installed. The amount of time given to cross Lakeview is very long at 28 seconds. To cross Fullerton, it's only 18 seconds, and I didn't measure the width, but it was easy to reach the other side, even walking very slowly.

I think you know by now what I'm going to say for our first opinion: We're recommending to upgrade the markings of the crosswalks to the international ladder-style and repaint stop bars, in order to improve visibility.

Our next recommendation is to consider Leading Pedestrian Intervals. This would give people crossing a few seconds to enter the crosswalks before turning vehicles.

Our final recommendations have to do with the eastern leg of the Fullerton crosswalk. When we approached the intersection, we thought that it was actually missing a crosswalk there: The painted markings are so faded that it looks non-existent based on that alone, but adding to our misperception is the fact that there is no curb cut on the south side of the crosswalk, and the path of the crosswalk leads directly into the traffic signal pole. Obviously, this makes the crosswalk useless for someone in a wheelchair or needing another type of mobility assistance.

Therefore, we recommend that a curb cut be installed that meets width standards and is placed so that it's fully user-friendly. This may require relocating the mail box and adjusting the placement of the crosswalk paint stripes.

We will be sending a letter to Alderman Michele Smith making these recommendations, similar to the one we sent in connection with our Halsted and Armitage intersection review two weeks ago.

What are your thoughts on these two Fullerton intersections? As always, we welcome your comments below.

If you'd like to find out when our next "intersection party" is going to be, follow us on Twitter @BikeWalkLP or e-mail Michael and me at bikewalklincolnpark@gmail.com to receive (very occasional) e-mails from us. No experience necessary -- just come add your voice and join the fun!